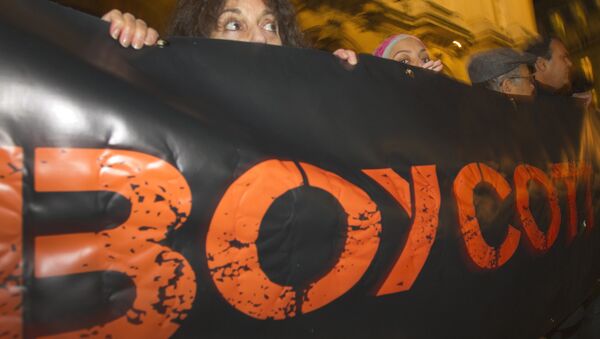 Sputnik Radio’s Fault Lines radio program spoke with CODEPINK co-founder Medea Benjamin Monday after the Israeli government on Sunday published a blacklist of groups and activists, CODEPINK among them, now banned from entering the country for their involvement in the boycott, divestment and sanctions movement targeting Israel.

The list of 20 groups also includes the American Friends Service Committee, a Quaker organization that won the Nobel Peace Prize in 1947 for helping rescue victims of Adolf Hitler's Nazi regime.

The list took Benjamin and CODEPINK by surprise. "We had no idea our group was going to be part of the list of organizations," she told Fault Lines. To be enumerated on the list of banned groups is "appalling," she said.

​"We should recognize that the state of Israel is founded on the dispossession of Palestinians and that this is something that marks the beginnings of Israel and continues until today. That's why there's been this boycott, divestment and sanctions movement as a nonviolent way to say this state does not represent our values — and for some of us, our values as Jews — and that we have to find ways to push Israel to become a truly democratic state," Benjamin told Fault Lines.

"People are saying to us, ‘you should see it as a badge of courage that your work has been so good that the Israeli government finds it threatening,'" Benjamin said.

"I don't see it that way," the peace activist emphasized. "I want to be able bring groups to Israel. I want to be able to expose people to the good and the bad of Israeli society. We've taken hundreds of people to the Gaza Strip, which some people call the largest open-air prison in the world. Because of the logistics, the only way to go is to go through Israel. But if we can't get into Israel, we can't get into Gaza."

Roger Waters: ‘On the Altar of Zionism, They Want to Tear Up the Constitution’

The ban has not weakened CODEPINK's resolve to fight for Palestinians' human rights, however.

"Our response will be to increase all efforts to challenge Israeli policies of occupation and apartheid," CODEPINK said in a Sunday statement. "We remain committed to using the BDS nonviolent movement tactic to reveal corporate complicity in Palestinian human rights violations," CODEPINK said.

For example, Benjamin said that the group encouraged supporters to call their representatives in Congress on Monday morning urging the lawmakers "to denounce this ban."