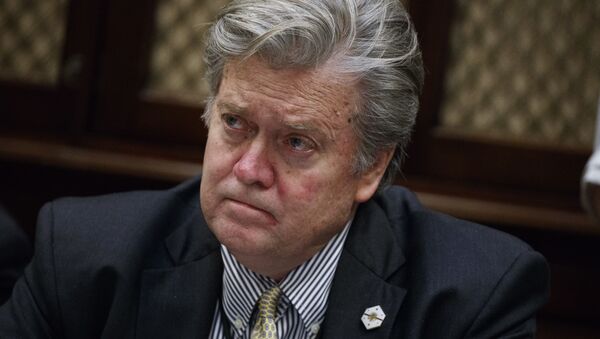 Steve Bannon, Trump’s campaign executive during the 2016 presidential campaign, regretted not clarifying earlier his remarks about the June 2016 meeting in Trump Tower between the son’s president and Russians, which he called "treasonous" and "unpatriotic," according to the revelations the Guardian posted last week.

Under fire, Bannon backs off explosive comments about Trump's son WASHINGTON (Reuters) — President Donald Trump's former strategist Steve Bannon on Sunday backed away from derogatory comments ascribed to him about Trump's son in a new book that sparked W… https://t.co/Cwh3ZhryjQ

Meanwhile, in his Sunday’s statement to media outlets, Bannon chose not to apologize for any of his remarks to "Fire and Fury" author Michael Wolff, in which he reportedly criticized harshly the president’s daughter, Ivanka Trump, calling her "dumb as a brick," as well as her husband, Jared Kushner.

He hurried to say that the comments over the Trump Tower meeting in actual fact referred to Trump’s then campaign chairman Paul Manafort, who also took part in the meeting.

"My comments were aimed at Paul Manafort, a seasoned campaign professional with experience and knowledge of how the Russians operate," Bannon said. "He should have known they are duplicitous, cunning and not our friends. To reiterate, those comments were not aimed at Don Jr."

It was always clear to me that when #Bannon said that they would "crack Don Jr. like an egg" he was only referring to Manafort.

How could everyone get this wrong??

Clarifying his point, Bannon said he was slow to react to the "inaccurate reporting" thus diverting attention from "the president’s historical accomplishments in the first year of his presidency."

Bannon issued his statement after Trump and his allies lashed out at him following the publication of Wolff’s "Fire and Fury: Inside the Trump White House," which resulted in Bannon losing the major Republicans' patronage.

Too late Bannon. You showed a human side to your Vader mask. Lol. Scumbag. All of you deserved each other. But we did not.

The US President claimed the other day that Bannon had "lost his mind" and begged for his job when he was fired from the White House last summer. Trump also scolded Bannon on Twitter as "Sloppy Steve" adding he has rightfully been "dumped like a dog by almost everyone."

Bannon’s apologetic statement also contained a rather extraordinary explanation for his remark, quoted in Wolff’s much debated book, that the Trump Tower meeting had been "treasonous, or unpatriotic, or bad shit."

He said: "My comments about the meeting with Russian nationals came from my life experiences as a naval officer stationed aboard a destroyer whose main mission was to hunt Soviet submarines to my time at the Pentagon during the Reagan years, when our focus was the defeat of 'the evil empire,' and to making films about Reagan’s war against the Soviets and Hillary Clinton’s involvement in selling uranium to them."

An inquiry into the alleged Russian meddling into the American presidential campaign is still underway. It has been led by Special Counsel Robert Mueller since last May. He is also investigating a meeting, attended by Trump Jr. and Kushner, in the context of reported Russian collusion – something both parties flatly deny.