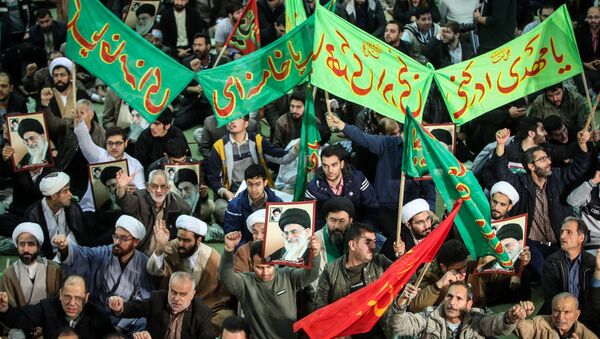 Finian Cunningham
All materials
There seems little doubt that the surge in New Year protests across Iran was, at least in part, following a regime-change agenda set by the United States.

Public statements issued by US President Donald Trump and his senior officials all made strident calls in support of protesters while denigrating the Iranian government as a "brutal oppressor." Arguably, that amounts to audacious incitement of sedition in a foreign state, and such American misconduct should be legally sanctioned.

What’s remarkable too is just how close the recent turmoil in Iran seemed to follow a well-worn US formula for regime change, including political statements of condemnation; biased media coverage to undermine the legitimacy of the target government; and the apparent hijacking of peaceful protests by violent provocateurs.

'Finish Line'? Trump 'to Fix or Cancel' Iran Nuke Deal Next Week - Tillerson
Such a formula has been used by Washington and its allies in dozens of countries over the decades, including more recently in Syria during the 2011 unrest that led to an all-out war.

What is acutely resonant is the historical background. Iran was probably the first nation to have been subjected to American regime-change operations in the post-Second World War period, with the CIA-led coup carried out in 1953.

But first, let’s look at the flagrant attempts by the US to destabilize the Iranian government through highly pejorative and misleading public statements.

Last week, the American ambassador to the UN Nikki Haley even claimed that "the Iranian people are crying out for freedom against their dictators." A senior official in the US State Department also admitted that his government was communicating via social media with demonstrators in Iran.

READ MORE: US Mediator Role in Palestine-Israel Row Likely to Fade Away — Activist

Washington’s top diplomat, Secretary of State Rex Tillerson, openly said in a media interview this weekend that his government is seeking "political transition” in Iran – or, in other words, regime change.

Also this weekend, the US called an emergency meeting of the UN Security Council in an attempt to censure the Iranian government for the dozens of deaths incurred during the week-long protests. Haley declared: "The world is watching what Iran does."

Iran, Russia, and China have berated the US for violating Iranian sovereignty by interfering in the country’s internal affairs. The brazen attempt by the US to fuel protests in Iran is indeed a serious breach of the UN Charter forbidding interference in any nation’s political matters. US regime-change policy is arguably criminal conduct.

Iran Envoy to UN: Tehran Has 'Hard Evidence' Protests Incited From Abroad
It remains to be seen just how actively involved on the ground US agencies were in stoking the recent protests in Iran. The initial demonstrations that first broke out on December 28 in the city of Mashhad quickly spread to dozens of other urban centers. Iranian authorities have blamed the US and other foreign enemies for being behind the disturbances.

A legitimate part of the rallies was motivated by genuine economic grievances among the population. But at the same time, the rapid escalation of violence and armed attacks on police stations suggest that a subversive plot was being orchestrated.

The role of the US news media, and to lesser extent European, in covering the Iranian unrest was also indicative of a geopolitical agenda. The American media, in particular, tended to portray the protests in a benign light as an uprising against an autocratic regime.

Nikki Haley, the US envoy to the UN, dismissed Iranian claims of foreign subversion. Haley’s dismissal contradicts the public statements and admissions of the US president and other senior officials.

However, Iran has sound reason to suspect a pernicious agenda seeking to exploit social protests.

Protests in Iran Abating but Possibility of New Escalation Exists - Specialists
In 2013, some 60 years after the 1953 coup in Iran, the CIA was obliged to disclose classified documents that prove the agency was behind that infamous event. The CIA worked covertly with its British counterpart MI6 to carry out Operation Ajax to overthrow the elected government of Prime Minister Mohammad Mosaddegh. Mosaddegh intended to nationalize Iran’s oil industry, thereby threatening American and British interests.

The coup ushered in the rule of the pro-Western Shah Pahlavi who opened up Iranian oil fields to American and British companies. The CIA and US military were lynchpins in the Shah’s regime and its brutal repression of Iranians until he was finally overthrown in the Islamic Revolution of 1979. For this reason, Washington has never forgiven the Iranian people and is why the US political establishment is driven by regime-change obsession in Tehran.

What is telling are the similarities between events then and now. The CIA-led coup in 1953 involved a propaganda campaign using news media outlets to undermine the government. The New York Times labeled Mosaddegh a “dictator” and compared him to “Hitler” and “Stalin”. Britain’s state broadcaster, the BBC, was also involved in the campaign to undermine the Iranian authorities, as Mark Curtis recounts in his book Web of Deceit.

Back in Washington and London, the political leaders implemented an economic embargo on Tehran and denounced it as a Soviet stooge.

Iranian Top Prosecutor Accuses US, Israel and Saudi Arabia of Staging Protests
When the coup got underway, the CIA is now on record admitting that it paid thugs and provocateurs to launch street violence in Tehran, which was blamed on the authorities ostensibly showing a heavy-hand.

From the CIA and MI6’s point of view, the coup was a stunning success. The regime change opened up big oil interests. For the Iranian people, it meant years of vicious repression under the Shah and his CIA-trained SAVAK secret police.

In 1953, the CIA was only newly formed in the aftermath of the Second World War. What the Iran coup marked was a fateful turning point for the agency, and the nature of American governments ever since, with global repercussions. In its original formation, the CIA was only intended to serve as an “intelligence gathering” service to aid US presidents to formulate foreign policy.

What the coup in Iran marked was the beginning of a "secret government" within the US; one that was above the law and unaccountable. US presidents would come and go in elections, but the "deep state" of the CIA would remain. It assumed the powers to carry out regime change against any foreign government regardless of international law. Subversion and political assassination would become tools of this new US statecraft.

Iran Fries US for 'Intervention' and Trump's 'Absurd Tweets' About Protests
Once the CIA got the habit of regime change in Iran it could not stop. Since 1953, the American “secret government” has gone on to conduct dozens of such dirty operations around the world with deadly and horrific consequences for masses of people.

While the recent social protests in Iran have subsided, nevertheless there also seems to be another, more sinister dimension to the Iranian disturbances – an illegal agenda of regime change promoted by Washington.

Given that Iran is "ground zero" for America’s historical worldwide practice of regime change, the threat to national security from foreign interference is an understandable concern.

Russia and China have taken the correct position in warning the US to cease adding instability in Iran. The Iranian people must be safeguarded from external meddling to resolve their own internal problems. The laughable irony is that while American politicians and media complain hysterically about others meddling in their country, they have no qualms about brazenly poking into Iran.