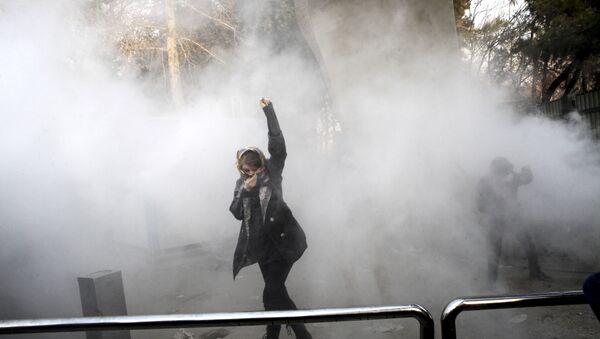 © AP Photo
Subscribe
International
India
Africa
The Iranian government has hard evidence that the violence in the ongoing protests in the country is incited from abroad, Iranian Ambassador to the United Nations Gholam Ali Khoshroo said during an emergency UN Security Council meeting.

"We have hard evidence of the violence in Iran by a handful of the protesters, in some cases resulting in the deaths of policeman and security officers, being very clearly directed from abroad," Khoshroo said on Friday.

Iranian Envoy to the UN Gholam Ali Khoshroo also stressed that the United States is abusing its power as a member of the United Nations Security Council and as a permanent member of the council by calling a meeting to discuss the protests in Iran.

"The move by the United States to bring to this council protests in Iran by some of our citizens for legitimate grievances some exacerbated by none other than US itself in its dereliction of its obligation under the Joint Comprehensive Plan of Action [JCPOA] is an abuse of its power as a permanent member and an abuse of the council itself," Khoshroo said on Friday.

Moreover, Khoshoroo pointed out instigators based in the United States and Europe have been seen inciting violence during the protests in Iran. The instigation has included such activities as encouraging and training people to use Molotov cocktails, capture ammunition depots and stage an armed uprising.

Iran should be the one calling for an investigation into the role of foreign elements instigating violence in the country, Khoshroo concluded.

World
UK Intelligence Agency Actively Plotted Social Disruption in Iran
The UN Security Council meeting was called by the United States which has taken an active interest in what it sees as attempts by Iranian authorities to crack down on pro-democracy protesters. The US envoy to the UN, Nikki Haley, said the world was watching what the Islamic Republic was doing.

Meanwhile, China's Deputy Ambassador to the United Nations Wu Haitao said Friday his country took note of protests in Iran but believed they were its domestic issue that lay outside of UN’s scope.

"The Iranian situation does not pose any threat to international peace or security nor is it on the agenda of the Security Council. Discussing this domestic situation of Iran by the Council is a practice that is not in line with the Council’s responsibilities," he said at the meeting. "China takes note of the recent domestic developments of Iran," Wu admitted, adding Beijing trusted the Iranian government with doing what needs to be done to keep the country stable. He stressed UN’s interference would not help resolve the issue.

European Citizen Detained During Protests in Iran - Iranian Official
The Russian Ambassador to the United Nations Vassily Nebenzia stressed it is unacceptable to use "bogus pretext" to include internal political issues of Iran in the agenda of meeting. Nebenzia said the domestic political situation has stabilized in recent days. He added the Iranian people were united by anti-American feelings.

Nebenzia pointed out the real reason for convening the meeting was not a desire to protect human rights or promote the interest of the Iranian people, but rather an attempt to undermine the Joint Comprehensive Plan of Action (JCPOA).

"It is obvious for everyone that the topic chosen today does not fall within the prerogatives established by the UN charter," Nebenzia said. "The real reason for convening today's meeting is not an attempt to protect human rights or promote the interest of Iranian people, but rather an attempt to use the current moment to continue to undermine the Joint Comprehensive Plan of Action."

World
Iran's FM Zarif: 'Trump Has an Odd Way of Showing Respect for Iranians'
Russian Ambassador emphasized that the United States is undermining the authority of the United Nations Security Council by calling a special meeting on protests in Iran.

If the Security Council follows the logic of the United States, they should have called meetings after violent protests in Ferguson, Missouri or waves of unrest in any Western country, Nebenzia said.

The envoy urged the Security Council members to allow Iran to deal with its own problems and rather focus on crisis situations in Lybia, North Korea, Syria.

Meanwhile, the United Kingdom and France call on the member states that make up the Joint Comprehensive Plan of Action (JCPOA) to uphold their commitments so that the Iranian people may see its benefits, UK Ambassador to the UN Matthew John Rycroft said during a Security Council meeting.

"The United Kingdom remains fully committed to the Joint Comprehensive Plan of Action, it is one of the international community’s greatest successes in recent memory, we welcome Iran’s compliance with its nuclear commitments," Rycroft said on Friday. "We encourage all member states to uphold their commitments so that the Iranian people see the tangible benefits of this deal."

Pence: New Iran Legislation Will Replace 10-Year Moratorium on Nuclear Deal
From the perspective of finding a solution to the "flash points" in the crisis in the Middle East, the UN Security Council must remain fully committed to upholding the nuclear agreement with Iran and must fully promote its implementation, French Ambassador Francois Delattre said during the emergency meeting.

In October 2017, US President Donald Trump refused to confirm to the US Congress that Iran strictly abides the nuclear deal but at the same time he did not question compliance on the international level. The United States has since delivered additional sanctions on Iran.

However, US Ambassador to the United Nations Nikki Haley warned during a UN Security Council meeting on Friday that Iran has been put on notice that the world is watching how Tehran handles the ongoing anti-government protests.

"The Iranian regime is now on notice. The world will be watching what you do," Haley said.

"The UNSC rebuffed the US' naked attempt to hijack its mandate. Majority emphasized the need to fully implement the JCPOA and to refrain from interfering in internal affairs of others. Another FP blunder for the Trump administration," he tweeted.

Protests in Iran Abating but Possibility of New Escalation Exists - Specialists
Russia, China, and France – three of the body’s five permanent members – spoke against the US move to raise anti-government protests in Iran at a UN meeting, saying they did not pose a risk to international peace or security.

They and the United Kingdom also spoke in favor of keeping the 2015 deal with Tehran in place. Russia’s Ambassador Vassily Nebenzia accused the United States of calling the briefing to undermine the Joint Comprehensive Plan of Action, which saw Iran scale back its nuclear activities in return for sanctions easing. President Trump has called it the worst deal ever.

The Iranian people have taken to the streets in major cities in the country since December 28, 2017, to protest against unemployment, poverty, rising cost of living and policies of Iranian President Hassan Rouhani and Supreme Leader Ali Khamenei. At least 20 people have reportedly been killed and 450 have been detained, according to published reports.