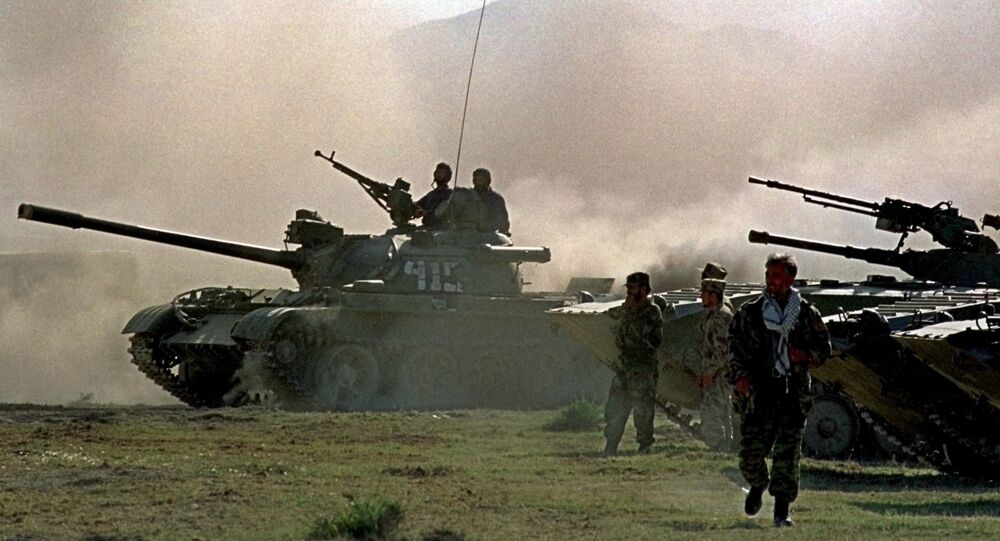 A new Pentagon report claiming that Iran supports terrorist groups such as the Taliban and al-Qaeda has been disseminated through American media outlets - but has come under fire for wishy-washy claims about the said connections.

For instance, one supposed link came when Saad bin Laden, one of Osama bin Laden's sons, fled to Iran after the September 11, 2001, attacks in the US. But what isn't mentioned is that Saad and his family were detained upon arrival and placed under house arrest. Khalid bin Laden, another of Osama's sons who was killed alongside him during the 2011 US Navy SEAL raid, accused the Iranians in 2010 of subjecting his family members to beatings and severe mistreatment.

Garland Nixon and Lee Stranahan of Radio Sputnik's Fault Lines spoke to John Kiriakou, a CIA agent-turned-whistleblower who helped reveal the CIA's torture program to the American public in 2007.

​"The whole thing rests on your definition of harbor," said Kiriakou. "Osama bin Laden's son [Saad] in the immediate aftermath of the [battle of Tora Bora in December 2001] fled to Iran with his wives and his children and a handful of hangers-on. They were promptly arrested at the border. They were not put under house arrest in some beautiful palace with servants and a view of the valley; they were put under arrest and put in a jail. If that's harbored, man, I don't want to be harbored."

"Let me say something unequivocally: there was no cooperation between al-Qaeda and Iran, just like there was no cooperation between al-Qaeda and Iraq." Kiriakou referenced a little-mentioned Taliban execution of Iranian diplomats a few years before 9/11: in 1998, in the city of Mazar-i-Sharif, the Taliban rounded up and killed a number of Iranian diplomats in retribution for Tehran's support of the Northern Alliance in their war against the Taliban in the 90s — the same Northern Alliance that the US supported when they invaded Afghanistan in October 2001.

"There's no love lost between between the Taliban/al-Qaeda and the Iranians," said Kiriakou. "I'm going to say it again unequivocally: there is no connection between Iran and al-Qaeda, this is being made up. There are other countries that would benefit from the proliferation of this lie — but that's what it is, simply a lie."

Nixon mentioned that the connection between al-Qaeda and Iran was drawn from a CIA document dump from early November, with all the articles appearing in a three-day period — almost as though the outlets had coordinated to make the story.

"This is what the CIA does to confuse people," said Kiriakou. "There's no analysis, there's no vetting of the documents, they just dump it. This is exactly what the CIA complained was happening during the first four years of the Bush administration, where the president is coming out or his aides are coming out and saying, 'there's cooperation between the Iraqi government and al-Qaeda.' There wasn't."

"But what was happening was that people in the [National Security Council] who had their own political agenda were passing the president raw intelligence that had not been vetted, not been analyzed by the directorate of intelligence. Well, the CIA is doing exactly the same thing now, but they're using the press as their dupe. They're just releasing this raw data taken off of Osama bin Laden's computers and saying, 'here it is!' No analysis, no nothing."

On Wednesday, former New York Times journalist James Risen published a story on The Intercept in which he claimed his skepticism that Iraq under Saddam Hussein was linked to terrorist groups such as al-Qaeda were on multiple occasions buried by the Times' editorial staff.

"My stories raising questions about the intelligence, particularly the administration's claims of a link between Iraq and al-Qaeda, were being cut, buried or held out of the paper altogether," Risen wrote. "What angered me most was that while they were burying my skeptical stories, the editors were not only giving banner headlines to stories asserting that Iraq had weapons of mass destruction, they were also demanding that I help match stories from other publications about Iraq's purported WMD programs."

Risen, and the others who were skeptical about the US intelligence community's claims that Saddam had partnered with al-Qaeda and other terrorist groups in order to garner support for the 2003 invasion, were vindicated by history when the alleged links were revealed to be false.