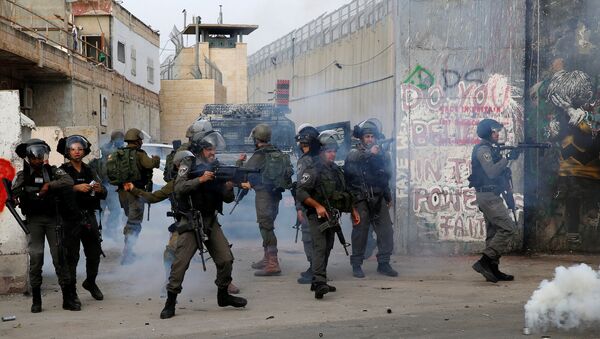 GAZA STRIP (Sputnik) - At least 10 Palestinians have been injured during clashes with the Israeli army in a refugee camp in Bethlehem, the Palestinian Ministry of Health said in a statement.

"During clashes with the Israeli army that occurred during the assault on the Dheisheh refugee camp in Bethlehem, 10 Palestinians were injured by service bullets of Israeli soldiers," the ministry said, adding that two people were in serious condition.

The clashes arose after US President Donald Trump announced his decision to recognize Jerusalem as the capital of Israel and relocate the US Embassy from Tel Aviv to the holy city on December 6. The move has led to the aggravation of the Israeli-Palestinian conflict, and multiple scuffles between Palestinians and Israeli police.

Jerusalem is claimed as the capital by both Israelis and Palestinians, who have been locked in a bitter, decades-long dispute over borders and sovereignty.

Clashes with #Israeli army when they stormed Dheisheh refugee camp in #Bethlehem, 9 #Palestinians were injured, 7 of them with live bullets and one in serious condition according to Pal health ministry pic.twitter.com/CBTuQxdpWM

​Meanwhile, Israel has reiterated its position on the disputed city by passing a bill on January 2, requiring a two-thirds majority the country's parliament, for the country to abandon control over any part of Jerusalem in favor of a foreign country. The new legislation may reportedly drive many Palestinians out of Jerusalem, as many of them do not have Israeli citizenship, holding only permanent resident status in the city, which can be withdrawn any time for different reasons.

The conflict dates back to 1967, when Israel seized Jordanian-controlled East Jerusalem during the Six-Day War. In 1980, the Israeli parliament adopted the Jerusalem Law and proclaimed the city as the "complete and united" capital of the country. The international community has never recognized the annexation and considers the status of the city to be one of the core problems of the Middle East conflict, which should be resolved on the basis of an agreement with the Palestinians, which claim the eastern part of Jerusalem. For this reason, all foreign embassies are located in Tel Aviv.