Protests in Prague Against Meeting of European Anti-Immigrant Parties 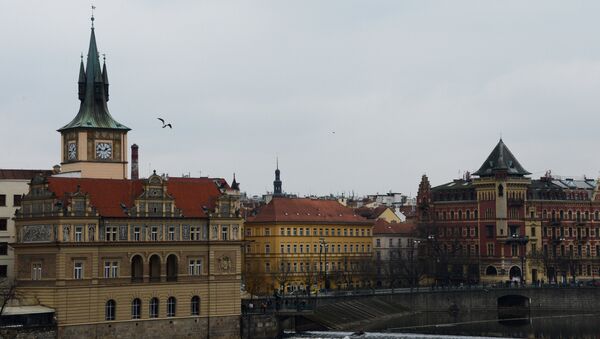 © Sputnik / Natalia Seliverstova
/
Go to the mediabank
Subscribe
International
India
Africa
The Congress of European anti-immigrant political parties, comprising representatives from 10 countries, is being held behind closed doors in the Czech capital of Prague.

PRAGUE (Sputnik) – December 16 witnesses demonstrations and rallies in Prague. People have gathered in the center of Chech capital, near the Top Hotel to protest against the Congress of European anti-immigrant political parties. A Sputnik correspondent reported about around 300 participants.

EU Commission Refers Prague, Budapest, Warsaw to Court of Justice
Former Czechoslovak dissidents and intellectuals spoke to the crowd before the beginning of the rally. They favor solidarity with refugees and guaranteeing their rights in the European Union.

READ MORE: About 3,000 People Protest Against Meeting of Eurosceptics in Germany's Koblenz

The total number of participants in rallies and demonstrations did not exceed one thousand citizens. According to the police, there were no incidents.
Some of the protesters also chanted anti-Russian slogans.

The сonference is running under the theme "For a Europe of Sovereign Nations – a model of cooperation for a better future for the Peoples of Europe." The event is organized by the Movement for a Europe of Nations and Freedom (MENL), which is a part of the Europe of Nations and Freedom (ENF) group in the European Parliament. The list of delegates includes senior EU politicians and lawmakers, among them France’s National Front leader Marine Le Pen and Geert Wilders of the Dutch Party for Freedom.

I just participated in the rally organized by the European political party Movement for a Europe of Nations and Freedom in Prague. So many exciting talks!
"With our protests, we want to show that the Czechs are not indifferent toward the manifestations of hatred and spread of disinformation of representatives of the parties, which gathered here," one of the rally’s organizers said.
MENL is composed of six national political parties represented in France, Belgium (Flanders), Austria, the Czech Republic, Poland, Italy and several individual members coming from the United Kingdom, Romania, and Germany. It is represented in the EU parliament by the Europe of Nations and Freedom Group.
Newsfeed
0
Access to the chat has been blocked for violating the rules . You will be able to participate again through:∞. If you do not agree with the blocking, please use the feedback form
The discussion is closed. You can participate in the discussion within 24 hours after the publication of the article.
To participate in the discussion
log in or register
loader
Chats
Заголовок открываемого материала