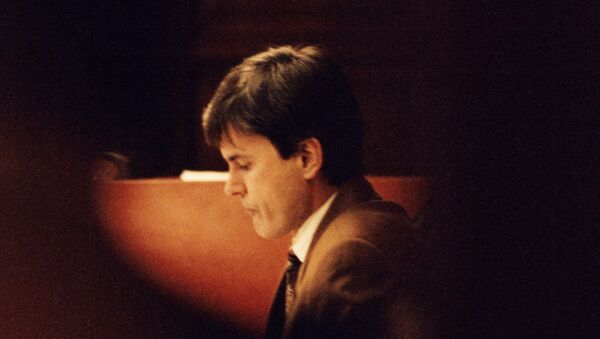 © AFP 2021 / Tobias Rostlund / TT NEWS AGENCY
Subscribe
A far-right Swedish extremist, whose "lone wolf" tactics are believed to have inspired Norwegian terrorist Anders Behring Breivik, appeared on trial today in Germany in connection with the unsolved murder of a Nazi death camp survivor that happened a quarter of a century ago.

Today, 64-year-old John Ausonius, currently jailed for life, appeared in a Frankfurt court, where he was tried for the 1992 murder of 68-year-old Blanka Zmigrod, a survivor of four Nazi concentration camps, including Auschwitz, and several death marches, the Swedish daily Aftonbladet reported.

According to the prosecution, Ausonius had a confrontation with Zmigrod, a cloakroom attendant whom he met at a restaurant while on the run from Swedish police and accused of stealing an electronic notebook from his pocket. The run-in allegedly ended with Ausonius shouting "we will meet again" while leaving the restaurant. Zmigrod was shot dead on her way home the following night by a hooded cyclist, who took her handbag and disappeared. A photofit picture of the alleged culprit later shown on German television revealed the assailant's similarities to Ausonius.

The Sadist Formerly Known as Breivik: Norway's Notorious Killer Changes Name
The Frankfurt case was reopened partly because of speculation that the German neo-Nazi terrorist group National Socialist Underground (NSU) saw the Laser Man's tactics as an example for similar killings, which it executed between 2000 and 2007.

Ausonius confirmed that he used to possess the same type of pistol and ammunition that were used in the murder, but denied shooting Zmigrod. His lawyer, Joachim Bremer, claimed that "isolated leads" did not form a conclusive chain of evidence proving Ausonius' involvement. "No DNA-traces, no technical evidence," he told Swedish national broadcaster SVT.

​However, Swedish police investigator Stefan Bergquist suggested a hate-related motive by revealing that Ausonius grinned and appeared pleased when learning of Zmigrod's Jewish ancestry during an interrogation.

Gellert Tamas, the author of the best-selling book "Laser Man" and a contributor to the eponymous documentary, ventured that Ausonius was likely to commit an act of this kind, because he traveled extensively between Sweden, Germany and South Africa at that time and had addresses and other sensitive information about weapons caches in the notebook.

"He acknowledged everything else. When I asked him about Blanka, he went quiet for a while. Then he said ‘you must understand that it's not in my interest to end up in trouble with German justice just as well.' He never denied it," Tamas said, recollecting his numerous interviews with Ausonius.

Breivik's 11: Far-Right French Assassins Targeted Multicultural Leaders, Muslims
The Frankfurt trial will continue until January 21. Regardless of its outcome, Ausonius will be returned to prison in Sweden, where he has already filed several unsuccessful petitions for a pardon.

Dubbed "Laser Man" because his rifle was equipped with laser sights, Ausonius is already serving a maximum sentence in Sweden for a shooting spree. In 1991 and 1992, he targeted immigrants in Stockholm and Uppsala, leaving one dead and permanently crippling several others. By Laser Man's own admission, his goal was to scare immigrants out of the country.

Norwegian white supremacist Anders Breivik, who killed 77 people in a series of attacks in Oslo's government quarter and the Labor youth camp on Utøya Island in July 2011, made a reference to Ausonius by claiming that he and Laser Man were spurred by the politics of multiculturalism.

Ausonius was born Wolfgang Zaugg to a Swiss father and a German mother. He obtained Swedish citizenship in his 20s and renamed himself after a Roman poet. According to Tamas, he was bullied at school for his "non-Swedish" appearance and even dyed his hair blond to gain a more "Nordic" look.