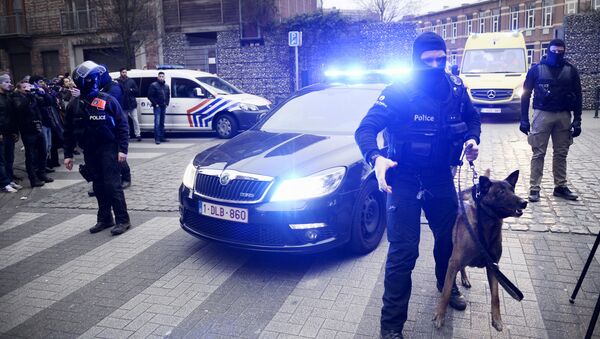 © AFP 2021 / Dirk Waem
Subscribe
After a joint investigation by France's special services unearthed a far-right group of Anders Breivik followers "plotting to kill" politicians, Anaïs Voy-Gillis, the founder of the European Observatory of Extremist Movements, argued there was a link between right-wing extremism and radical Islam.

A joint investigation by the Directorate of Homeland Security (DGSI) and the anti-terrorist unit of the Judicial Police (SDAT) has revealed a group of right-wingers preparing terrorist attacks against politicians and imams in France.

The alleged terrorist cell was reportedly led by Logan Alexandre Nisin, who admittedly was a fan of Norwegian right-wing mass killer Anders Behring Breivik. Nisin even dubbed himself "the Utøya hunter" on Facebook, alluding to the mass shooting initiated by Breivik at a Labor Party youth camp on the Norwegian island of Utøya, where he cold-bloodedly shot and murdered 69 people, mostly high school students.

​Nisin was arrested in southern France in June, and 10 of his followers were detained earlier this week. According to the French daily Le Monde, the group was plotting an attempt on the life of left-wing politician Jean-Luc Mélenchon, who leads the France Unbowed Party, as well as government speaker Christoph Castaner and various top Muslim religious leaders.

In an interview with Sputnik France, Anaïs Voy-Gillis, an expert on far-right movements and the founder of the European Observatory of Extremist Movements, attributed right-wing extremists' transition from words to actions to the sheer number of terrorist acts committed in France. In the recent years alone, France has been targeted in over 20 terrorist attacks, including the truck attack in Nice which claimed over 80 lives, the attacks in Paris, which claimed 130 lives, and a shooting attack against the French satirical newspaper Charlie Hebdo, that left 12 dead and 11 injured.

"There is this feeling that the nation is in danger, that it is being attacked, that its values are being overthrown by foreigners," Voy-Gillis told Sputnik, referring to the theory of the "Great Substitution," according to which the European authorities are allegedly in the process of replacing the indigenous population with newcomers from the Islamic world. This idea, which is connected with the notion of "white genocide," permeates the far-right narrative.

Former French PM Valls Slams Left-Wing Lawmaker for 'Political Islam Complicity'
Voy-Gillis stressed that mosques and people representing the cream of France's political society were specifically targeted, since they were seen as a corrupt class supporting the very concept of multiculturalism. The elite is seen as the cause of all these problems and a conceivable target, she added.

"Today members of the far-right say: 'no one does anything, and if I do nothing to protect my country, no one will.' They consider themselves in some way to be the last bastion [of resistance] in the face of the barbarians," Anaïs Voy-Gillis told Sputnik France, stressing the consequences of globalization and the ensuing loss of identity.

Patric Calvar, the former head of the General Directorate of Homeland Security, previously voiced fears of upcoming violent clashes between the European far-right and the Muslim newcomers. According to Anaïs Voy-Gillis, there is no real reason to apprehend a "civil war" between the two camps, as they almost never interacted in real life.

"While brawls between the far-right and the far-left are possible, because there are places where they cross paths, there are very few places where confrontation between Islamic radicals and the far-right can occur, as both these camps tend to hold their own ground," Anaïs Voy-Gillis said. "There is a risk, however, that some individual might attack Muslims peacefully going to the mosque to pray, mistaking them for some kind of jihadists," she concluded, stressing that one act of terrorism might encourage others to follow suit.

000000
Popular comments
I was just thinking maybe the far right has the right political view and the left has the wrong one! Did these people think that everyone would willingly go along with the destruction of their nation and culture and there would be nobody upset about it?