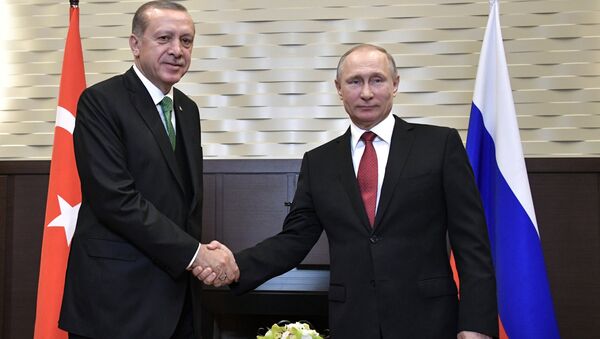 Putin is in Ankara on a working visit to discuss bilateral cooperation, as well as to exchange views over the situation in Syria and the crisis sparked by US President Donald Trump's declaration of Jerusalem as the capital of Israel.

Speaking at a joint press conference with Turkish President Recep Tayyip Erdogan in Ankara, Russian President Vladimir Putin said that Moscow and Ankara believe that US President Donald Trump's decision to recognize Jerusalem as the Jewish state's capital is "destabilizing the already complicated situation in the region."

In his turn, the Turkish president said that Trump's move has "dissapointed Muslims, Christians and even Jews."

"Over the course of the recent four days, four Palestinians were killed in clashes, while the number of those injured has risen to up tp 2,000. Israel regards it as a chance to exert more pressure on Palestine," Erdogan said.

"In two days, Istanbul will host the summit of the Organization of Islamic Cooperation, where a very strong message on Jerusalem will be sent," the Turkish president stressed.

Erdogan has numerous times slammed Trump's decision on Jerusalem, saying that the US becomes a "partner in bloodshed" by recognizing the Holy City as the capital of the Jewish state, while lashing out at Israel Erdogan dubbed a "terrorist state" that "kills children."

In its turn Moscow has voiced concern over the move, with Putin saying earlier in the day at talks with Egypt's President Sisi that "long-term and fair agreements respecting the interests of both sides are needed" to solve the Israeli-Palestinian crisis.

The two leaders of the states-guarantors of the Syrian ceasefire have discussed the peace process in the Arab Republic.

"We agreed to continue close coordination in the context of preparations for the eighth international meeting on Syria in Astana, which is scheduled for late December. I would like to note the positive contribution of the Republic of Turkey and President Erdogan to this work aimed at the reconciliation of the sides," Putin said after the talks.

The Russian president said that the Syrian Constitution would be discussed during the National Dialogue Congress in Sochi scheduled for the beginning of the next year, adding that after that "efforts will be made to intensify the Syrian settlement within the framework of the Geneva talks as well."

Commenting on the fight against terrorists in Syria, Putin stated that almost all territory had been freed, adding that "in case of the resumption of some terror hotbeds of resistance, we will take effective countermeasures."

Putin's meeting with Erdogan comes just hours after the Russian president has announced the troops' withdrawal from Syria.

According to Putin, as the Syrian independence and sovereignty has been preserved due to the Russian assistance in the country's fight against terrorism, conditions for the political settlement in the country under the auspices of the UN have been created and the refugees, that had to flee their homes, may return.