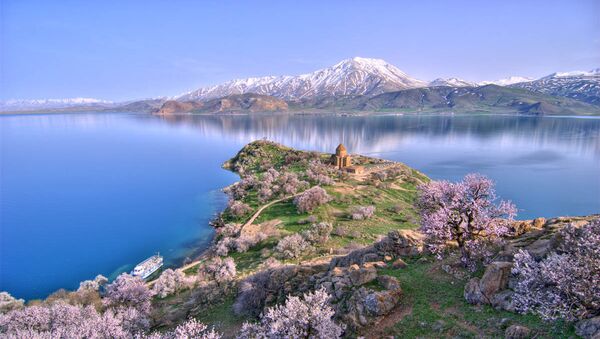 A team of university archaeologists from Van Yüzüncü Yil University led by Tahsin Ceylan discovered the ancient structure, which spans more than a half mile and is ringed by 10-foot walls, below the lake's surface.

"There was a rumor that there might be something under the water, but most archaeologists and museum officials told us that we won't find anything," Ceylan, an underwater videographer, said in a recent interview with Turkish newswire service Andalou Agency.

"It is a miracle to find this castle underwater," Ceylan said. "Archaeologists will come here to examine the castle's history and provide information on it."

The underwater fortress is estimated at about 3,000 years old, according to Turkish publications. The walls are most likely made of stones that date to the Urartu civilization, an Iron Age kingdom that existed from 860 BC to 590 BC.

Urartu, which is also known as the Kingdom of Van, was an ancient civilization that settled in parts of modern-day Turkey, Armenia and Iran.

​Ceylan told Turkish newspaper Hürriyet Daily News that the people who settled around the lake "named the lake the ‘upper sea' and believed it had many mysterious things."

"With this belief in mind, we are working to reveal the lake's secrets," Ceylan added.

The archaeologists speculate that rising lake levels submerged the city over time.

"As the lake waters rose, people withdrew, but the structures stayed there. Even though most of them are in ruins, they are still there," Ceylan said, Business Insider reported.

Archaeologists and divers plan to continue exploring the lake to uncover more about the ancient castle.