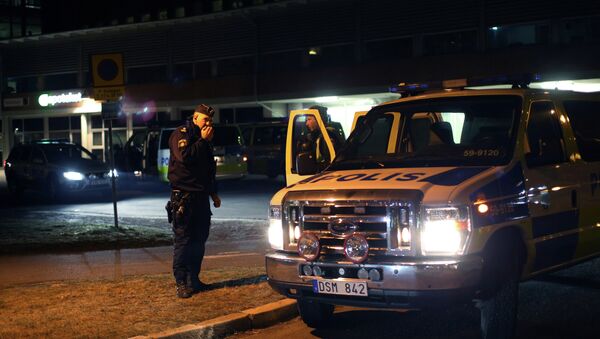 © AP Photo / Bjorn Larsson Rosvall
Subscribe
The incident took place in the wake of protests against US recognition of Jerusalem as the capital of Israel. Police are investigating the attack.

Three people have reportedly been arrested in the firebomb attack on a Swedish mosque.

Over a dozen masked men threw firebombs at a synagogue in the southern Swedish city of Gothenburg. No one was hurt in the attack, local media reported.

Several people were inside the building during the attack and they went to the basement floor for safety until the police arrived, a witness told the Expressen daily.

"A burning object has been thrown" outside the synagogue building, Lars Tunefjord, local police commanding officer, told Sveriges Radio. He added that the police were at the scene conducting a "technical investigation and searching for the perpetrators."

#BREAKING: 20+ people have thrown Molotov cocktails at synagogue in central #Gothenburg #Sweden — no one was injured; a car has been set fire by the synagogue pic.twitter.com/v4z6HZirFs

According to other witnesses, a fire started in the yard of the synagogue after protesters demonstrating against US President Donald Trump’s decision to recognize Jerusalem as Israel’s capital threw firebombs at the building. The fire was extinguished soon after the attack.

The president of the Jewish Assembly of Sweden, Allan Stutzinsky, who was at the site during the incident, claimed that a dozen  pro-Palestinian supporters were involved in the attack.

"About ten youngsters outside the gates of the synagogue ignited objects, burning objects that were later thrown over the gates into the synagogue," Stutzinsky told the radio station.

Hours before the attack, several hundred people marched through the city’s center, protesting against the US President’s Wednesday decision.

Jewish Agency for Israel spokesperson Avi Mayer has expressed his concern over the recent anti-Semitic attack and rally that took place in Sweden.

"Just last night, protesters shouted "we're going to shoot the Jews" in Malmö, Sweden's third-largest city. I cannot imagine what it feels like to be a Swedish Jew today," he wrote on Twitter.

Earlier on Saturday, hundreds of pro-Palestinian protesters staged a demonstration in the Swedish city of Malmo, shouting anti-Jewish and anti-American slogans.

Washington’s decision to declare Jerusalem as the capital of Israel has sparked backlash among Muslims and Arabs across the world. Austria and France also witnessed protest marches on Saturday.

000000
Popular comments
didn't take a genius to predict this would be happening.