Why INF Treaty Between US, Russia Remains Key to Global Security 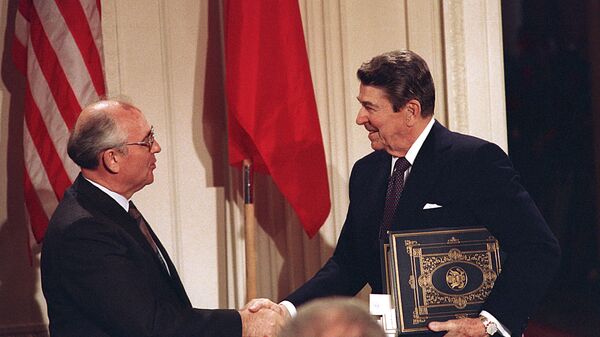 Friday, December 8, marked the 30th anniversary of the signing of the Intermediate-Range Nuclear Forces Treaty, an unlimited duration agreement signed between the United States and the Soviet Union. Today, this agreement is more important than ever before, a former East German diplomat, Hubert Thielicke, told Sputnik.

Pointing out that the INF Treaty is now in danger, Hubert Thielicke said, "The US wants to resume the use of the missiles banned by the document, despite the fact that Russia has been reducing its military budget."

Between 1981 and 1984, Thielicke co-chaired the delegation of East Germany to the Geneva Disarmament Conference.

Elaborating on his assumption, the former diplomat said that certain signs in the US, including in Congress, indicate that Washington wants to use new intermediate-range missiles.

In this context, according to Thielicke, the current military policy of the US, which focuses on new conceptions of nuclear weapons, is a "big problem" for Russia.

"If you take a look at their plans you will be shocked. The US has already announced a $50 billion increase in military spending for the next year. On the contrary, Russia will decrease its military budget by 25 percent in 2018. At the moment, there is no reaction to this from the American side," he told Sputnik Germany.

Washington has repeatedly accused Moscow of violating the INF Treaty. For example, the US claims that in 2008 Russia test-launched a long-range missile, in violation of the treaty. In September, US Secretary of State Rex Tillerson accused Russia of violating the INF treaty. The Russian Foreign Ministry said the US accusations were groundless, adding that the US did not present any evidence to support its claims. On Friday, Politico reported that the US Commerce Department would impose sanctions on Russian companies over alleged violations of the INF Treaty.

According to Thielicke, such allegations against Russia "have never been well-founded enough." He also said that US officials never provided a single piece of evidence to back up their claims.

Kremlin Expects From US Commitment to INF Treaty
On the other hand, Russia has also accused the US and its European allies of violating the INF Treaty. For Moscow, the most problematic issue is the deployment of US missile defense components in Europe. Moscow insists the development of the US missile shield in Europe is a threat to peace and a violation of the agreement.

"Both sides have exchanged accusations. This motivated me to meet certain people during talks and discuss the issue. But as we know nothing is being done on the matter now," said Thielicke, suggesting that it will be "difficult to make progress" with the current US presidential administration.

The INF Treaty was signed by US President Ronald Raegan and Soviet leader Mikhail Gorbachev on December 8, 1987, and came into effect on June 1, 1988.

The treaty prohibited the production, testing and deployment of ground-based ballistic and cruise missiles, with ranges of 500-1,000 km (short-range) and 1,000-5,000 (medium-range). It also eliminated all launchers and ground-based missiles with a range of 500-5,500 km.