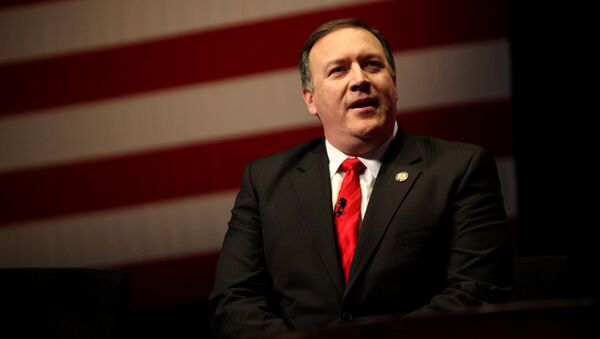 Strained relations with Iran and the common threat of terrorism are the factors building a bridge between Saudi Arabia and Israel, according to Mike Pompeo.

Speaking at the Reagan National Defense Forum in California, the CIA chief said that Saudi Arabia is directly working with the Israelis to “push back against terrorism throughout the Middle East.”

Citing Daesh, Iran and "failed states" as posing a challenge to Saudi Arabia and Israel, Pompeo advised the two sides to develop their relationship even further, hinting that a joint military headquarters can provide stability.

“We’ve seen them [Saudis] work with the Israelis to push back against terrorism throughout the Middle East, to the extent we can continue to develop those relationships and work alongside them – the [Persian] Gulf states and broader Middle East will likely be more secure,” Press TV reported Pompeo as saying.

World
CIA Chief Blasts WikiLeaks, Warns Iran Against Attacking 'US Interests in Iraq'
He called for building "a strong coalition that can operate – frankly I think with a joint military headquarters that can… target the terrorists in that region, that can basically work together to try to provide stability.”

“We have ties that are indeed partly covert with many Muslim and Arab countries, and usually [we are] the party that is not ashamed,” he said in an interview on Army Radio.

Former 'Economic Hitman' Reveals to Sputnik How CIA, NSA Conceal Activities
Hence, Pompeo’s statements seem to support what Israeli officials have been saying, even as Saudi officials have publicly denied any increased cooperation without progress on the Palestinian negotiations first.

Saudi Arabian Foreign Minister Adel Jubeir told Egypt’s CBC television station that “there are no relations between Saudi Arabia and Israel. There is the Arab peace initiative, which shows the road map to reach peace and establish normal [ties] between Israel and Arab states,” the Jerusalem Post reported.

However, according to some reports both Israel and Saudi Arabia are alarmed by the growing power of Lebanon's Hezbollah movement, which has been vital in the fight against terrorists and other militants in Iraq and Syria.