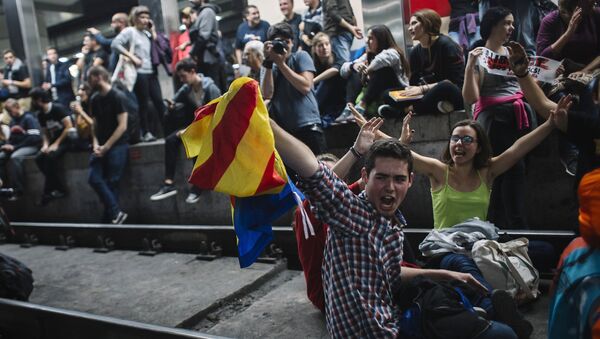 Madrid has invoked Article 155 of the Constitution that imposes direct rule over Catalonia, which had unilaterally declared independence from Spain following an independence referendum.

MOSCOW (Sputnik) — More than 60 percent of Spanish citizens support the idea of amending the country's Constitution, however, oppose the idea of including articles that allow independence referendums to be held, a fresh poll showed on Sunday.

The survey, conducted by Sigma Dos for El Mundo newspaper by phone on November 23-29 among 900 people, showed that 61.6 percent of the respondents considered it necessary to amend the Constitution, while 63.8 percent said they were against changes that would allow independence referendums to be carried out.

At the same time, 68.5 percent of those surveyed expressed confidence that Spanish political parties would be unable to reach an agreement on constitutional changes, and therefore, no changes would be introduced, the poll revealed.

Catalonia held an independence referendum on October 1, with over 90 percent of the 2.26 million Catalans who participated in the vote supporting the region's secession from Spain, while Madrid called the vote illegal.

The Catalan government adopted a resolution on the region's independence from Spain on October 27, in response to which Madrid dissolved the regional government and called snap parliamentary elections for December 21 by invoking Article 155 of the Constitution that imposes direct rule over the region.