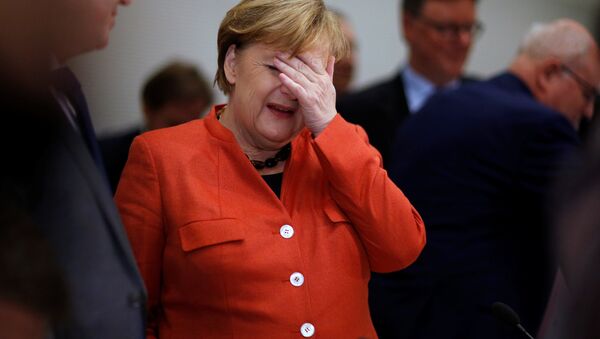 While German Chancellor Angela Merkel hopes to quickly form a new government to avoid snap elections in the country, the Social Democrats, on whom everything depends, seem to have quite a different take on the issue.

"The conservatives, Greens and FDP took months to get nothing off the ground so I'd ask people not to put pressure on us," the politician stated, cited by Deutsche Welle.

Earlier, German Chancellor Angela Merkel, CSU head Horst Seehofer and SPD leader Martin Schulz failed to achieve any concrete results during their talks on Thursday night held at the invitation of President Frank-Walter Steinmeier. A new round of negotiations between CDU and SPD representatives is set to take place on Friday and is supposed to help find ways toward possible cooperation between the two parties.

Last Saturday, German Chancellor Angela Merkel changed her stance on snap elections, giving up the idea of a new vote and claiming that "asking voters to go to the polls again" would be "totally wrong."

She also added that "Europe needs a strong Germany" and "it is desirable to get a government in place quickly."

For his part, SPD leader Martin Schulz, who has not been fond of the idea of forming a grand coalition with the CDU conservatives since election night, when both the CDU/CSU and the SPD suffered their worst election results since the 1940s, pledged to reconsider his stance, a move that came as result of pressure from German President Frank-Walter Steinmeier and that, as many hope, could help avoid a political crisis in the country.

READ MORE: Merkel's Party Throws Support Behind Grand Coalition, But 'Not At Any Price'

Merkel's fourth term was cast into doubt when four weeks of talks to form a new German government collapsed after the Free Democratic Party (FDP) withdrew from the negotiations on formation of the so called "Jamaica coalition" with CDU, CSU and the Greens.

Germany is now in the crosshairs between snap elections to the Bundestag and further attempts to form a coalition. Possible options include the renewal of the grand coalition between CDU/CSU and the Social Democrats or the creation of a minority government.