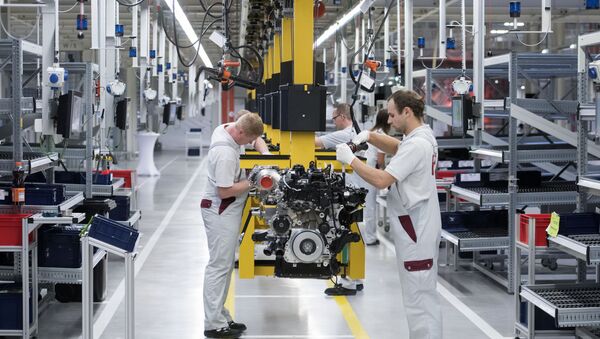 MOSCOW (Sputnik) — EU sanctions against Russia have put tens of thousands of jobs on the chopping block in Germany, a lawmaker from the EU-skeptic Alternative for Germany (AfD) has told a Russian newspaper.

Anti-Russian Sanctions Increasingly Hurting German Economy
He said the AfD, which emerged as the third strongest party in Germany in the September 24 general elections, would seek to scrap restrictions on Russia.

In addition, a renowned German politician Sahra Wagenknecht has said earlier that the waves of political and commercial restrictions against Russia have primarily harmed the European economy, having not resolved any of the important international issues.

Previously, Michael Harms, chairman of the Russian-German Chamber of Commerce, said that the German economy suffers billions of loses in euros annually due to the ongoing anti-Russian policy.

The European Union imposed sanctions on Russia after the start of the Ukraine crisis and Crimea's decision to rejoin Russia in 2014. Moscow refuted the accusations of meddling in Ukraine and introduced a food embargo on the countries that targeted it with economic restrictions.