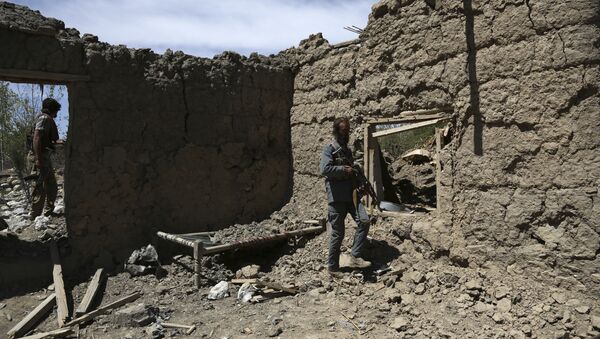 MOSCOW (Sputnik) — Afghan presidential national security adviser Mohammad Hanif Atmar has stated that Kabul is not planning to completely give up on the Mi-17 helicopters and will use military equipment of both Russia and the United States.

“I think that such a dual system will be the best option for Afghanistan. We hope that cooperation on Afghanistan will be restored and tensions will be reduced. It depends on both sides, all sides should work constructively. We have a common enemy and common challenge, which we cannot overcome individually,” Atmar said.

Pentagon Must Reverse Decision to Conceal Afghan Reconstruction Data
According to the official, the United States has spent “hundreds of millions dollars” on the purchase of Russian Mi-17 helicopters for Afghanistan, which has become a large contribution to the combat capabilities of the Afghan forces.

“It was a wonderful example of cooperation between Russia and the United States on Afghanistan. We hope that such cooperation will be restored between the most important partners,” Atmar said.

The situation has also been commented on by the Director of the Russian Foreign Ministry's Second Asian Department Zamir Kabulov, who said that Moscow considers the decision of the US and NATO leadership to fully replace Russian armaments and equipment in Afghanistan with pieces produced in Western countries completely counterproductive.

"Such steps undermine the combat capabilities of the Afghan national security forces and endanger our common goal — stabilization of the situation in the Islamic Republic of Afghanistan," Kabulov, who also serves as the Russian presidential envoy to Afghanistan, added.

Foreign Troop Withdrawal Should Not Be Condition for Peace Talks

However, the diplomat stressed that the Russian agencies and government bodies are working on several requests from the Afghan side on defense industry cooperation, citing the November 2016 intergovernmental agreement on defense industry assistance to the Islamic Republic of Afghanistan, which stipulates the legislative basis for Russian assistance in arming and equipping the Afghan armed forces.

READ MORE: Pentagon Says All 3,000 US 'Uplift' Troops Now on Ground in Afghanistan

"We advocate for equitable cooperation and coordination of approaches based on the national interests of all countries of the region without exception, and we are open to cooperation with those regional and extraregional actors, who are sincerely interested in ensuring stability in Afghanistan and who are not attempting to achieve their own agenda in this country," according to Kabulov.

Moreover, the diplomat reiterated Moscow's commitment to peace and stability in Afghanistan.

"Russia is sincerely interested in the earliest return to normalcy for the people of Afghanistan. We believe that the launch of a national reconciliation process should be the focus of the settlement in the Islamic Republic of Afghanistan. To that end, Russia has initiated consultations on Afghanistan in Moscow," Kabulov said.

READ MORE: Moscow Calls for Probe Into US Bombing in Afghanistan's Kunduz

Commenting on cooperation with Russia on the fight against terrorism, Afghan presidential national security adviser Mohammad Hanif Atmar said that Afghanistan offered to hold a meeting of the heads of intelligence services of Russia and Central Asian countries.

According to Atmar, withdrawal of foreign troops from Afghanistan should not be a preliminary condition for launching the peace talks, but rather be the aim of these talks.

“We estimate that there are nearly 3,000-4,000 people. They are first of all recruits and criminals from Pakistan, there are also the Afghan nationals, but mainly Daesh in Afghanistan comprises the representatives of the Islamic Movement of Uzbekistan [terrorist group, banned in Russia], which declared their allegiance to Daesh,” the Afghan official said commenting on the total number of Daesh militants in Afghanistan.

Kabul has no evidence that Russia is supporting the Taliban terrorist group, Atmar said adding that Kabul expects Russia to use its contacts with Taliban to persuade them to sit down at the negotiating table, Atmar told journalists.

Afghani Defense Minister: No Evidence of Russia Supporting Taliban
In August, US Secretary of State Rex Tillerson directly accused Russia of supplying weapons to the Taliban. However, in October, Pentagon chief James Mattis said that the United States had seen some evidence of Russia's support for Taliban, but it could not determine the nature of such support, because it was sure that this did not correspond to Russia's national interests. Zamir Kabulov called such claims irresponsible and groundless, and said that Russia had not provided either military, or financial assistance to the outlawed group.

Kabul has offered Russia, the Western and Central Asian countries to establish mission to reveal facts for the support of Taliban movement, it can be set up under the UN auspices, Mohammad Hanif Atmar said.

According to the official, Afghanistan maintained friendly relations with “the United States, NATO, the West, but also with Russia, China, Central Asia, India and Iran.”

“The format of such mission will be discussed, but its idea is that all the partners should seek to find out the truth together. It may be within the United Nations. This proposal has been praised by many people, but we have not reached agreement on the issue,” Atmar said.

He noted that Kabul suggested that “Afghanistan will become a place for cooperation, not conflicts.”