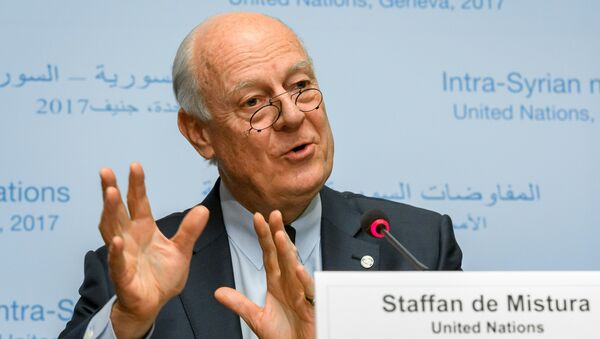 GENEVA (Sputnik) — Russian Deputy Foreign Minister Gennadiy Gatilov said Tuesday that he had a constructive and detailed discussion with UN Special Envoy for Syria Staffan de Mistura about the situation in crisis-torn Syria as well as the recent joint statement issued by Russian President Vladimir Putin and US President Donald Trump.

"We have had quite detailed and constructive negotiations with de Mistura regarding the future steps toward the settlement of the Syrian crisis. It is extremely important that this meeting came almost right after the adoption of the joint statement on Syria by Russian President Vladimir Putin and US President Donald Trump, in which the two leaders advocate the sovereignty and territorial integrity of Syria, and define further steps to fight against terrorism," Gatilov said.

He pointed out that de Mistura had commended on the joint statement by Putin and Trump.

"In his opinion, this creates a qualitatively new situation in Syrian settlement," Gatilov indicated.

'On-The-Fly': Joint US-Russian Statement on Syria Takes Months of Preparation
On Saturday, Trump and Putin had a brief on-the-go meeting on the second day of the APEC summit in Vietnam, during which they approved a joint statement on Syria. The two parties agreed to continue joint efforts aimed at fighting Daesh until its complete defeat and to achieve the comprehensive settlement of the Syrian conflict within the framework of Geneva peace talks.

Syria has been mired in civil war since 2011, with government forces fighting numerous opposition factions and Islamic extremist groups. The international community has taken a number of steps aimed at settlement of the crisis, including via different formats of talks, in particular, in Geneva and Astana.