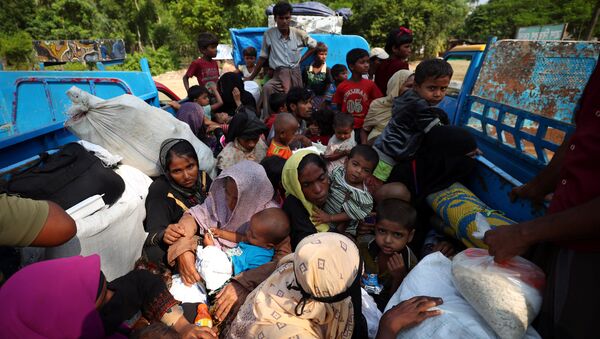 The UN Security Council has issued a presidential statement expressing serious concern over human rights violations in Myanmar, including by the security forces, and calling on the government to refrain from the excessive use of force.

UNITED NATIONS (Sputnik) – Members of the Council also expressed their alarm at the "significantly and rapidly deteriorating humanitarian situation" in Rakhine state that could potentially further destabilize the situation in the region.

"The Security Council further expresses grave concern over reports of human rights violations and abuses in Rakhine State, including by the Myanmar security forces, in particular against persons belonging to the Rohingya community," the statement said. "The Security Council calls upon the Government of Myanmar to ensure no further excessive use of military force in Rakhine state."

US Lawmakers Introduce Bill to Impose Sanctions on Myanmar Military Officials
The Council also condemned the attacks against Myanmar's security forces that were carried out on August 25 in Rakhine State by the Arakan Rohingya Salvation Army (ARSA) and expressed concern over human rights violations perpetrated by ARSA.

The Council stressed the government’s responsibility to protect the population and ensure the respect of human rights and asked it to grant unhindered access to UN agencies and partners with the goal of providing humanitarian assistance.

It also commended the government of Bangladesh for welcoming Rohingya refugees and making efforts to alleviate their suffering and encouraged it to continue its efforts.

Initially, the United Kingdom and France suggested adopting a Security Council resolution on Myanmar but after consultations with Council members the decision was made in favor of a presidential statement.