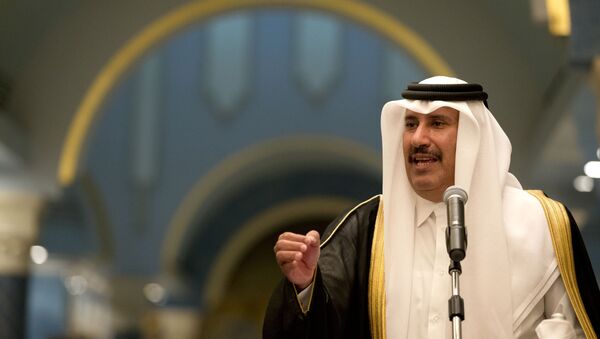 © AP Photo / Jacquelyn Martin
Subscribe
Suliman Mulhem
All materials
As the Syria crisis approaches its 7-year anniversary, the Syrian Army, backed by a coalition of domestic and foreign allies, is continuing nationwide military operations against various terrorist groups. The ongoing conflict morphed out of the uprising in 2011, which formed part of the wider Arab Spring.

Several leaders and governments in the region were toppled, but President Bashar al-Assad is looking increasingly secure, as support for him continues to grow within Syria, and world powers gradually soften their stance and rhetoric towards his government.

Although the Trump administration is considered to be more receptive of the Syrian government than its predecessor, as President Trump considers Daesh's defeat to be the priority, their policy has been somewhat muddled, with US Secretary of State Rex Tillerson recently stating that Assad must leave office.

"The United States wants a whole and unified Syria with no role for Bashar al-Assad in the government. It is our view and I have said this many times as well that we do not believe that there is a future for the Assad regime and Assad family. The reign of the Assad family is coming to an end. The only issue is how that should be brought about," Tillerson told reporters in Geneva in October.

Meanwhile, the former Prime Minister and Foreign Minister of Qatar, Hamad bin Jassim, confirmed his country's involvement in propping-up opposition forces in Syria, including groups which form part of the Al-Qaeda network.

"All aid distributed on Syrian territory was also coordinated by the US forces… Maybe there was some 'interaction' with Al-Nusra (Al-Qaeda linked) militants," former Prime Minister of Qatar, Hamad bin Jassim, said.

He also added that his nation is not currently hostile towards the Syrian government.

By War or Dialogue, Syrian Army Will Retrieve Syria's Oil Reserves From SDF
Although the alliance between Gulf states and Islamist groups in Syria is largely known, his comments further corroborate claims of wide-scale foreign involvement and meddling in Syria to affect regime-change.

The Syrian uprising itself was ultimately an Islamist revolution seeking to remove the secular Baathist government. The movement gained very little support from non-Sunni Muslims, as well as more liberal Sunnis. The few Christians and Druze who did initially support the revolution quickly abandoned it, as its true nature and objectives transpired.

The pattern of the protests is indicative of the revolution's origins — they mainly took place near Mosques, after Friday prayers. There weren't any protests after or during other religious gatherings, or more typical incubators for pro-reform revolutions, such as universities.

Sectarian language and chants were used at rallies in Syria as early as 2011, with some calling for Sharia law, and the formation of an Islamic caliphate.

Footage uploaded in mid-2011 purports to show a pro-democracy rally in the predominantly Sunni city of Hama, with most of the chants translated into English. At the beginning of the video, they say "Bashar [al-Assad] you're not from us," referring to his different religious background, as a non-Sunni.

Why the Kurdish-Dominated SDF Isn't Fit to Govern Syria
Some Syrians don't view the ongoing war as a standalone conflict; it's often viewed as part of the Syrian government's broader battle against radical Islamist terrorists since the 20th century, such as the Muslim Brotherhood.

Although the Kurds utilized the unrest in Syria to gain territory in the northern part of the country, the Kurdish quest for autonomy is a fundamentally separate movement.

Delegates from the Syrian government are meeting with backers of opposition forces in Astana, Kazakhstan to discuss the implementation of de-escalation zones across Syria, including the provinces of Idlib, Damascus and Deraa.

With Daesh' remaining caliphate continuing to decline, pro-government forces could soon shift their efforts and resources to tackling other militant groups in the war-torn state, unless a satisfactory deal is reached.