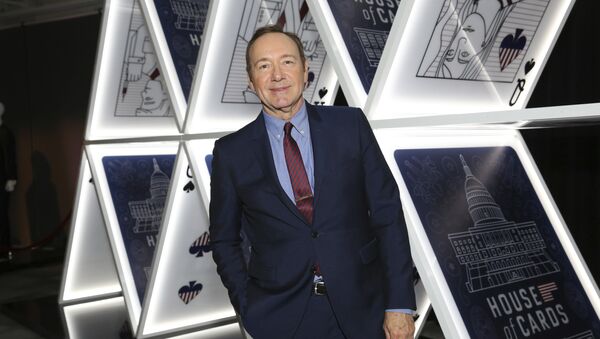 Following accusations of abuse from several Hollywood players, new appalling allegations against the actor have emerged from a number of men in the wake of other sex scandals in the industry.

Scotland Yard officers are investigating the claims of a man sexually assaulted in London nine years ago while Kevin Spacey was working there, the Guardian reports, saying that the abuser is understood to be the 58-year-old Hollywood actor, despite police not confirming his identity.

"On 1 November, City of London police referred an allegation of sexual assault to the Metropolitan police service," a Scotland Yard spokesman was quoted as saying by the paper. "It is alleged a man assaulted another man in 2008 in Lambeth. Officers from the child abuse and sexual offences command are investigating."

No arrests have been made in connection with the investigation. According to the Sun, the complainant had been interviewed by police. The man, who is now 32, claimed that Spacey abused him after he passed out at the actor's home. When he awoke, he allegedly found Spacey performing a sexual act on him.

Eight people working on Netflix's "House of Cards" with Kevin Spacey blamed the actor for turning the set of the political drama series into a "toxic" work environment through sexual harassment and "predatory" behavior, CNN reported on Thursday.

New accusations surfaced less than a week after actor Anthony Rapp revealed in an interview with BuzzFeed News about Spacey's unwanted sexual advance toward him more than 30 years ago, when Rapp was just 14 years old.

Kevin Spacey's Brother Reveals Horrors of Childhood Calling Father 'Nazi Rapist'
One former production assistant, who spoke with CNN on the condition of anonymity, said Spacey — the series' lead star and an executive producer — sexually assaulted him, putting his hands down the assistant's pants.

"I was in a state of shock," he said. "He was a man in a very powerful position on the show and I was someone very low on the totem pole and on the food chain there." He also revealed that Spacey cornered him on set making inappropriate non-consensual contact with him.

"I have no doubt that this type of predatory behavior was routine for him," the man added. "It was a toxic environment for young men who had to interact with him at all in the crew, cast, [and among] background actors."

Another crew member also said that Spacey routinely harassed and touched him. "He would put his hands on me in weird ways," the man said, adding that "the worst part about this whole thing" was that he was afraid to speak out.

Spacey ‘Grabbed My Whole Package’: More Sexual Harassment Allegations Surface
Six other employees from the show talked with CNN about their experiences with the actor, proving that the touching largely occurred in an open space and that "everybody saw."

MRC, the "House of Cards" production company, said on Thursday they were "deeply troubled to learn about new allegations" and that they "will continue to thoroughly investigate all current claims." The company also implemented an anonymous complaint hotline, enlisted crisis counselors, and sexual harassment legal advisers for the crew.

Since Rapp's sexual misconduct accusations surfaced, the International Academy in charge of the Emmy Awards has decided to revoke Spacey's award, which he was meant to receive for contributions to the quality of global TV in November. Netflix, the distributor of the series, announced on Tuesday that the show is coming to an end.

More allegations against the actor emerged on Wednesday from filmmaker Tony Montana, who claimed that Kevin Spacey drunkenly grabbed his groin in 2003, and from actor Roberto Cavazos who admitted to have "a couple of nasty encounters with Spacey" at the Old Vic theater in London.