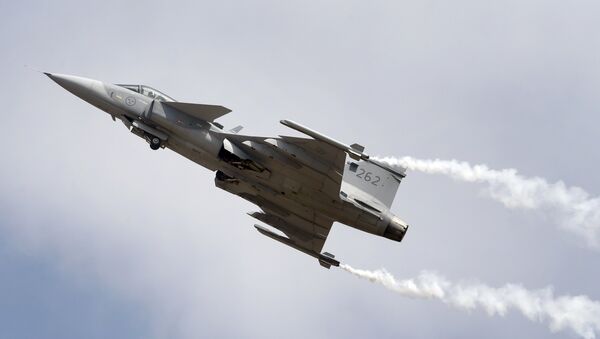 © AP Photo / Aijaz Rahi
Subscribe
Sweden's foremost arms manufacturer Saab is optimistic about increasing weapons sales across the globe and is looking forward to exceeding the company's long-term financial targets. However, Saab's sunny plans may be hampered by Stockholm's plans to impose stricter ethical rules for the arms trade.

Earlier this month, the Saab Defense Group reported a 62 percent increase in booked orders from January to September, due to a number of major sales of surveillance aircraft and weapon systems, as well as support contract signings. With booked orders over this period amounting to SEK 24.2 billion ($2.9 billion), Saab has already topped the total amount of bookings made over the entire 2016 period. Additionally, sales were reported to have risen by 10 percent compared to the same period last year, the Swedish news outlet Evertiq reported.

"In major parts of the world, we are still witnessing increasing defense budgets and greater efforts on civil security than ever before," Saab CEO Håkan Buskhe wrote in the company's report for the third quarter.

Peaceful Swedes Want Their Piece of EU Arms Cake
According to Buskhe, Saab received a series of small and medium-sized orders during this period, including a three-year extension of a contract on services and simulators in tactical training with the UK Department of Defense.

Håkan Buskhe also said that he expected cyber warfare and cyber defense to be a new major growth area. According to him, Saab is increasingly investing in cyber research and development, while the whole area is growing at more than 20 percent a year.

Earlier this year, Saab also voiced hopes of boosting its submarine sales to Asia amid the North Korean crisis, which coupled with increasing political tensions in the region spurred many Asian nations into bolstering their defense capabilities. Saab's main hope, the A26 submarine project, has not fared too well on the European market and could receive a more than welcome boost in Asia.

​However, Saab's plans could be thwarted by a series of measures toughening regulations over the nation's military exports in accordance with a 2015 cross-party agreement.

According to the bill currently under debate in the Swedish parliament, the recipient country's democratic status should constitute an imperative condition for arms exports. The worse the country's status, the less room for permission there will be.

Swedish Saab Hopes to Make Billions on Europe's Sweeping Military Upgrades
In addition the Swedish government is proposing enhanced supervision and tougher penalties for certain violations of these regulations. The new ethical exports rules are proposed to enter into force in April 2018.

At present, it remains unclear whether it will affect Sweden's controversial arms exports to countries with a questionable human rights record, such as Saudi Arabia or the United Arab Emirates, which have been condemned by human rights activists.

Despite its solid reputation as an international peacemaker, Sweden is one of the world's largest arms exporters per capita, selling arms to the tune of SEK 11 billion ($1.3 billion) in 2016. Sweden's Defense Industry employs some 30,000 people, many of them in towns where arms factories are the largest private employer. The Saab Group alone employs over 15,000 personnel across Sweden.