Super Snub: POTUS Banned from Annual Gala Where He Proposed to FLOTUS (VIDEO) 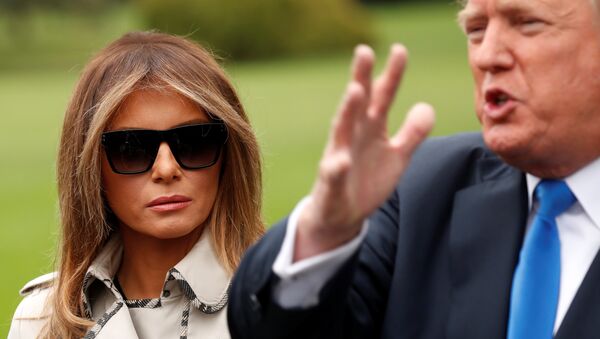 © REUTERS / Kevin Lamarque
Subscribe
US President Donald Trump is now banned from attending the A-list gathering of the Met Gala, the same high-profile fashion fundraising event where Trump proposed to Melania in 2004.

The news that Trump is no longer welcome at the big-ticket New York event was revealed by Anna Wintour, editor-in-chief of Vogue and long time host of the Met Gala, on The Late Late James Show with James Corden, on a segment of the show called "Spill Your Gut or Fill Your Guts."

Instead of eating pickled pigs' feet, Wintour opted to answer a question from the host instead.

"Celebrities from all walks of life are desperate to get a ticket" to the Met Gala, Corden said. "Everyone from Beyonce to George Clooney attends, so my question is who would you never invite back to the Met Gala?"

Wintour has hosted the fashion event since 1999. The now-married Trumps first attended the Met Gala as an unattached couple in 2003 and have frequently attended since their engagement in 2004.

Trump proposed to Melania at the 2004 event with a 13-karat diamond ring said to be worth almost $3 million, although in keeping with his modus operandi he claimed that he got it for half off the retail valuation.

​Wintour was one of the Trumps' guests at their Mar-a-Lago wedding reception, along with Bill and Hillary Clinton, and Melania was on the February 2005 cover of Vogue in her wedding dress.

The White House has not commented on Trump's ban from the famous New York event.