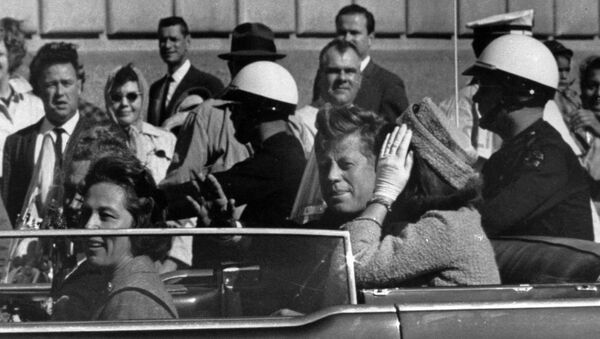 © AP Photo / Jim Altgens
Subscribe
What had been anticipated as the final release of files relating to the assassination of US President John F. Kennedy will not be so final after all: only 2,891 of the roughly 3,200 remaining secret documents related to the case were actually released on Thursday.

Facilitated by US President Donald Trump's approval, the bulk of the files were ultimately released, less than a month before the 54th anniversary of JFK's killing on November 22, 1963. This release of 2,891 files by the US National Archives was intended to comply with the JFK Assassination Records Collection Act of 1992, which stipulated the documents' release to the public no later than October 26, 2017. The law, approved by Congress and signed by then-President George H.W. Bush, was aimed at putting to rest the numerous conspiracy theories surrounding Kennedy's death.

The CIA and other agencies have long resisted making the information public, sparking controversy among politicians and ordinary Americans, and at the last minute managed to block the release of some of the last cache of files.

Last week, White House officials told US media that some documents from the 1990s may be withheld, and it is those files that it is believed remain sealed today, out of fears they could reveal sources and operations pertaining to the 1990s internal review of the assassination.

Ahead of the release, President Trump pledged that he would allow "the long blocked and classified" files "to be opened," pending analysis. However, thousands of pages are still being withheld at the request of US government agencies, among them reportedly the US State Department, the FBI and the CIA.

In a White House memo released Thursday, Trump said that the American public expects and deserves access to the files. "I am ordering today that the veil finally be lifted," he said. "At the same time, executive departments and agencies have proposed to me that certain information should continue to be redacted because of national security, law enforcement, and foreign affairs concerns. I have no choice — today — but to accept those redactions rather than allow potentially irreversible harm to our nation's security."

The remaining documents are to undergo a six-month review process, with a new release deadline of April 26, 2018.

Trump Pledges to Release Docs on Kennedy's Murder – Would They Give Answers?
Earlier, Congressman Walter Jones, sponsor of a bill which would guarantee the release of the files, told Sputnik that Americans "have a right to the truth" regarding the Kennedy assassination, and criticized the CIA for its attempts to block the release. According to the politician, the JFK assassination was "one of those tragedies, like Pearl Harbor, like 9/11," which changed America's direction.

"Anybody that does not want the American people to know the truth, they've got something to hide," he stressed. Jones added that President Trump "would be a hero with the majority of people as it relates to the Kennedy assassination" if he went ahead and released the files.

The murky official conclusion regarding Kennedy's death – that he was killed by lone gunman Lee Harvey Oswald, has led to a variety of conspiracy theories surrounding the president's death. The most popular among them claims that Kennedy was killed by the CIA or other elements of the US government. Cuban leader Fidel Castro, the mafia, Israeli intelligence, and a variety of other groups have also been named as possible conspirators. The CIA theory, popularized by director Oliver Stone's 1991 film "JFK," has remained the most popular. The film was one of the factors inspiring the creation of the 1992 JFK Assassination Records Collection Act.

000000
Popular comments
I was almost four when I heard of Kennedy's assassination. I didn't understand it but I understood the reactions in my parents faces. I live in Canada. I don't possibly see how something that happened in 1963 has anything to do with national security today. We all know that America is a murderous country that have done many things, right or wrong. Both the people of the US and the Kennedy family should have closure. It is not as if anyone is going to jail. It's a documentary of the 60's. The only person that goes to jail these days are 96 year old natzis. Release all of it. The 1960's compared to today are as different as night and day, so I fail to see the harm.
Rokenbok
27 October 2017, 03:05 GMT4
000000
Guess what? The Russians did it!
jake195
27 October 2017, 03:01 GMT
000000
Newsfeed
0
New firstOld first
loader
LIVE
Заголовок открываемого материала
Access to the chat has been blocked for violating the rules . You will be able to participate again through:∞. If you do not agree with the blocking, please use the feedback form
The discussion is closed. You can participate in the discussion within 24 hours after the publication of the article.
To participate in the discussion
log in or register
loader
Chats
Заголовок открываемого материала
Worldwide
InternationalEnglishEnglishMundoEspañolSpanish
Europe
DeutschlandDeutschGermanFranceFrançaisFrenchΕλλάδαΕλληνικάGreekItaliaItalianoItalianČeská republikaČeštinaCzechPolskaPolskiPolishСрбиjаСрпскиSerbianLatvijaLatviešuLatvianLietuvaLietuviųLithuanianMoldovaMoldoveneascăMoldavianБеларусьБеларускiBelarusian
Transcaucasia
ԱրմենիաՀայերենArmenianАҧсныАҧсышәалаAbkhazХуссар ИрыстонИронауОssetianსაქართველოქართულიGeorgianAzərbaycanАzərbaycancaAzerbaijani
Middle East
Sputnik عربيArabicArabicTürkiyeTürkçeTurkishSputnik ایرانPersianPersianSputnik افغانستانDariDari
Central Asia
ҚазақстанҚазақ тіліKazakhКыргызстанКыргызчаKyrgyzOʻzbekistonЎзбекчаUzbekТоҷикистонТоҷикӣTajik
East & Southeast Asia
Việt NamTiếng ViệtVietnamese日本日本語Japanese俄罗斯卫星通讯社中文（简体）Chinese (simplified)俄罗斯卫星通讯社中文（繁体）Chinese (traditional)
South America
BrasilPortuguêsPortuguese
NewsfeedBreaking
YesterdayFrance’s FM Says Aware of UK's ‘Permanent Opportunism’, Calls BoJo ‘Fifth Wheel’ in AUKUS
YesterdayMayor of Johannesburg Killed in Car Accident - Reports
YesterdayPython Falls From Rooftop in Australia After House Sheathed From Snakes - Photos
YesterdayWatch: SpaceX Capsule With All-Civilian Crew Splashes Down in Atlantic
YesterdayReport: Iran's Top Nuclear Scientist Was Killed by Weaponized Robot in Long-Planned Operation
YesterdayFour Arrested at Justice for J6 Rally, No Clashes With Counterprotesters
YesterdayAfghan Human Rights Commission Says Unable to Work Due to Taliban Interference
YesterdayFacebook CEO Zuck's Vax Promo Scheme Became 'Cesspool' of Misinformation, Minions Warned
YesterdayUS Air Force Reveals Conditions to Lift Decades-Long Ban on F-22 Raptor Exports
YesterdayOrganiser of 'Justice for J6' Rally in Calls on Protesters to Respect Law Enforcement, Media
YesterdayLion's Den vs Bunch of Kittens: Ex-Trump Press Sec Spicer Sad Because Reporters Treat Psaki Better
YesterdayPolice Bodycam Footage Shows Officer Confronting Armed Suspect
YesterdayUS Man Tells Wacky Story of Russian-Made Mi-17 of 'Secretive Agency' Landing in His Backyard – Video
YesterdayFDA Rejects Pfizer’s Initiative to Offer Booster Jabs After Reports on Vaccine’s Plummeting Efficacy
YesterdayUS Conducts Successful Test of Trident II Missile, Navy Says
YesterdayFrench Foreign Minister Says Paris Had No Prior Discussions on AUKUS, Submarines With US
YesterdayVideo: Hundreds of Illegal Immigrants Stream Across Rio Grande Into US State of Texas
YesterdayPhotos: LA Parents Angered by 'F**k Police', 'F**k Amerikkka' Posters Hung in Classroom
YesterdayLionel Messi’s Contract With Paris Saint-Germain Leaked, Report Says
Yesterday'Cocooning': Biden Team Created a 'Wall' to Guard Him From Unscripted Events, Book Says