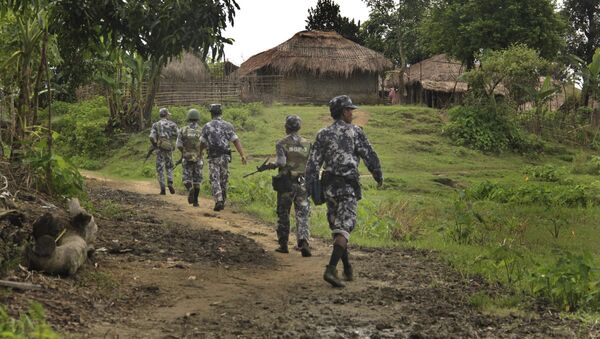 The United States has announced new restrictions concerning engagement with the Myanmar military over the violence against the Rohingya Muslim minority in Rakhine State. Washington is also weighing economic measures against those involved in the reported atrocities.

"We express our gravest concern over recent events in Rakhine State and the violent, traumatic abuses Rohingya and other communities have endured. It is imperative that any individuals or entities responsible for atrocities, including non-state actors and vigilantes, be held accountable," State Department Spokesperson Heather Nauert said in a statement on Monday.

In the statement, she also outlined the measures that Washington is going to take "in pursuit of accountability and an end to violence."

In particular, the US is withdrawing military assistance programs for Myanmar units and officers "involved in operations in northern Rakhine State." The measure will add to Washington’s already limited engagement with the Myanmar military and its long-standing embargo on all military sales.

In addition, the State Department said it has ceased its consideration of travel waivers for senior Myanmar military officials and is weighing economic sanctions against individuals "associated with atrocities."

'It's Truly Staggering': 145,000 Rohingya Children Looking Hunger in the Face
According to Bloomberg, this statement is one of the first signals that the US could re-impose the sanctions on Myanmar that were lifted last year as the country shifted toward democracy after the National League for Democracy party led by Aung San Suu Kyi won the country’s first openly contested election for decades in 2015.

"The Government of Burma, including its armed forces, must take immediate action to ensure peace and security; implement commitments to ensure humanitarian access to communities in desperate need; facilitate the safe and voluntary return of those who have fled or been displaced in Rakhine State; and address the root causes of systematic discrimination against the Rohingya," Nauert said.

The Rohingya crisis, which actually originated in a conflict from the 19th century, intensified on August 25, 2017, when Muslim insurgents of Rohingya origin attacked security posts in Myanmar's Rakhine State.

Myanmar’s subsequent brutal crackdown led to a spate of clashes and the death of hundreds of Rohingya people. More than half a million Rohingya Muslims have already fled Myanmar, crossing into neighboring Bangladesh.