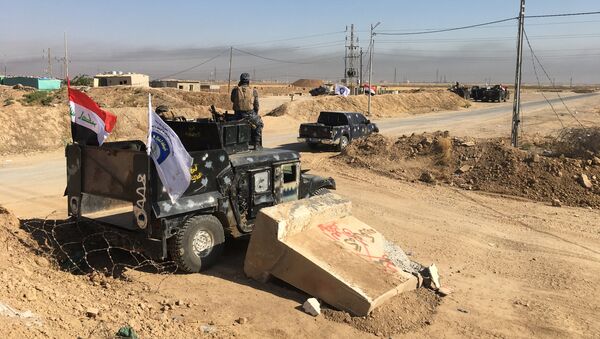 Iraqi military forces have reported the capture among several other positions of the K1 airbase from Kurdish troops in the Peshmerga-controlled province of Kirkuk in a bid to gain control of the oil-rich region after the independence referendum.

Tarklan settlement and Baiji town, as well as two checkpoints in the province, are also under control of Iraqi forces, as they continue to advance, the statement read.

Iraqi Army Advances on Kurdish-Held Kirkuk: Exchanges of Artillery Fire Reported
There has been no confirmation of the Iraqi armed forces' advance from the Kurdistan Regional Government, but Kurdish Rudaw TV channel reported Peshmerga forces losing position south of Kirkuk.

Late on Sunday, Iraqi Prime Minister Haider Abadi ordered the country’s army and police to secure bases and federal installations in Kirkuk, but avoid confrontations with the Kurdish forces. He also ordered to cooperate with Peshmerga militia and avoid confrontations. However, local media reported that clashes had already taken place between the Iraqi forces and the Kurdish Peshmerga.

The oil-rich Iraqi province of Kirkuk participated in September’s Kurdish independence referendum, despite not being part of Iraqi Kurdistan.