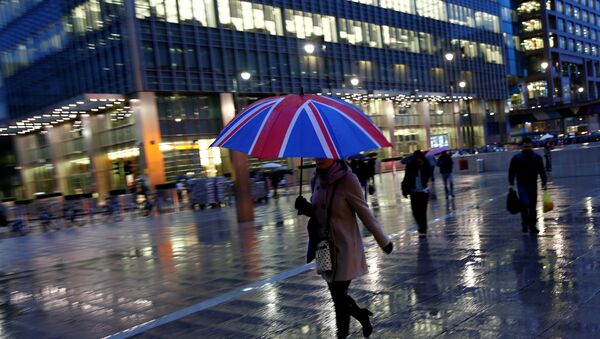 UK economic expansion in Q3 was modest, yet sustainable, and the Bank of England draws support for its rate hike case from heightened inflation pressures and an improving manufacturing sector.

Kristian Rouz — The British economy demonstrates sustainable dynamics amidst the Brexit headwinds as the Bank of England (BoE) is preparing for its fifth rate hike in over a decade. A solid labor market, and above-target inflation suggest a tighter monetary environment is appropriate, however, the weak expansion in the services sector and sluggish domestic consumption stir concern over the pace of GDP expansion.

The British Chambers of Commerce (BCC) says a rate hike decision from the BoE would still be "extraordinary," as the macroeconomic outlook is deemed modest due to an overall hardly optimistic business sentiment. According to the BCC's Quarterly Economic Survey, sales in the services sector have shown little or no expansion in Q3.

Report: UK 2018 Economic Outlook Improves as BOE Poised to Raise Rates
On the other hand, the BCC observed, investment gained momentum defying Brexit concerns, and the BoE is anticipating a robust acceleration in business spending next year. This creates a favorable backdrop for the central bank's policy tightening agenda.

The main reason for a rate hike, however, remains high inflation, which is overshooting the BoE's 2 percent target.

"It's sort of the opposite of the US story, where everyone's saying ‘if we're raising interest rates and getting on with QE unwinding it's because it's a sign of strength,'" Victoria Clarke of London-based Investec says. "In the UK it's a very different background, and there seem to be some more complicated reasons — one of which is that they're worried about a bit more of a persistent inflation problem."

The BCC, on its part, says UK business sentiment is "uninspiring," as many British businesses are struggling amidst political volatility, heightened Brexit uncertainty and currency fluctuations.

Amid Moderating Growth, Further Path for UK Economy Uncertain
The latter affects primarily the manufacturing sector, which gained a solid boost in the immediate aftermath of the Brexit vote last year. A sharp sterling devaluation rendered British industries more competitive internationally, but the revaluation of the pound this year has all but erased the optimistic hopes of British manufacturers.

The BCC also expects inflation to decline by itself, without any policy action on the BoE's part, as the experts feel corporate price pressures might be easing.

"We'd caution against an earlier than required tightening in monetary policy, which could hit both business and consumer confidence and weaken overall UK growth," the BCC's head of economics, Suren Thiru, says.

Last month, the BoE warned about a looming interest rate hike amidst accelerating inflation. Most observers are currently expecting the move to arrive in November.

Key British Defense Manufacturer to Reportedly Cut 1,000 Jobs in UK This Week
The BCC also says UK manufacturers posted upbeat results over the third quarter, due to improvements in foreign trade, rising exports and better domestic sales. This is despite the rebound of the pound's FX rate — yet a weaker sterling would have driven more solid gains.

Meanwhile, as manufacturing input costs — in the form of raw materials and energy — have been climbing steadily in recent months, many industrial enterprises say they are planning to increase output costs.

This, in turn, would propel inflation even higher, supporting the case for a BoE rate hike.

"I wouldn't go so far as to say the economy is doing well — I would've said that maybe a few years ago, but not now," Peter Dixon of Commerzbank AG says. "The economy can live with higher rates, or slightly higher rates — given that we're not falling off a cliff, at least not yet."

Meanwhile, the BoE governor, Mark Carney, says he is ready for a rate hike from the current all-time-low of 0.25 percent. The BoE's Monetary Policy Committee (MPC) voted 6-2 to hold rates steady at the previous interest rates decision in August, and the looming rate vote will reflect the influence of the elevated inflation expectations on MPC policymakers.