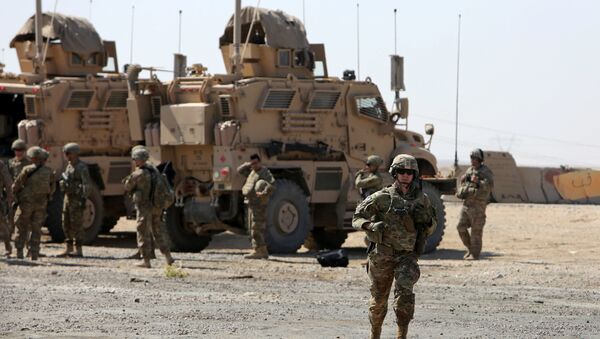 © REUTERS / Marius Bosch
Subscribe
According to the Russian Defense Ministry, the US-led coalition has sharply reduced the intensity of its attacks on Daesh in Iraq.

The continued provision of supplies to terrorists in Syria from their fellow militants in Iraq raises serious questions regarding the objectives of the US-led coalition, Russian Defense Ministry spokesman Maj. Gen. Igor Konashenkov said.

"The continuing supply of terrorists from Iraq raises serious questions about the objectives of operations against terrorists conducted in the region by aircraft of the United States and the so-called international coalition," Konashenkov said.

Pentagon Calls Russian MoD Remarks on US Coalition's Aims in Syria 'Ridiculous'
Following the beginning of the operation of Syrian troops in Deir ez-Zor, the United States reduced attacks on terrorists in Iraq.

Igor Konashenkov said that foreign mercenaries from Iraq use armored vehicles and pickups with weapons to provide daily replenishment to Daesh troops in the  Syrian city of Mayadin.

"The Russian Aerospace Forces destroyed the economic infrastructure of Daesh in Syria and any attempts by terrorists to resume production and illegal sale of hydrocarbons in Syria are being stopped. Daesh in Syria has no sources of financing arms and ammunition procurement or recruitment of mercenaries," Konashenkov said.

He said that in the western part of Iraq, Daesh-controlled territory continues to increase.

The Syrian army has expanded its controlled area around the city of Deir ez-Zor over the past week, Russian Defense Ministry spokesman added.

"The Syrian government troops, with Russian Aerospace Forces support, have significantly expanded the controlled territory to the northwest and southeast of Deir ez-Zor over the past week," Konashenkov said.

"At present, an operation is being carried out to liberate a large outpost of the Daesh [banned in Russia] near Mayadin (40 km southeast of Deir ez-Zor). At the same time, the fierce resistance of terrorists operating in the valley of the Euphrates River does not become less intensive," he said.