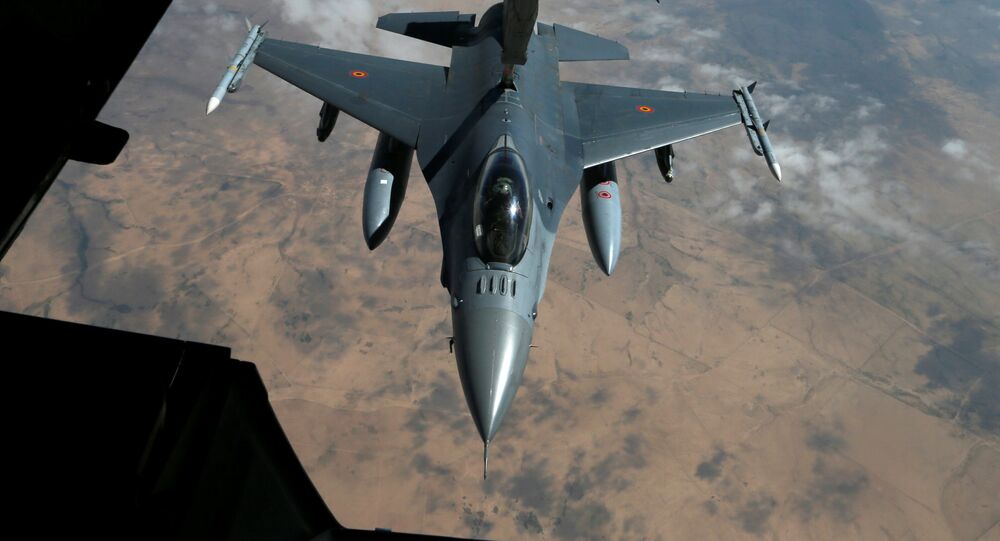 The leader of Hezbollah claims that Washington is using its Air Force to protect Daesh terrorist group in Syria from the Syrian Armed Forces.

DEIR EZ-ZOR (Syria) (Sputnik) — Hassan Nasrallah, the leader of the Lebanese Shiite paramilitary group Hezbollah, said that the United States is using its Air Force to protect the militants of the Islamic State (Daesh) terrorist group in Syria from the Syrian Armed Forces.

"The United States protects Daesh in several Syria's regions and prevents the Syrian army to end with the terrorists, by using aircraft," Nasrallah said Sunday, as broadcast by Al Manar TV channel.

The Hezbollah leader said that the Syrian army and the troops loyal to Damascus should mop up the country's territory from the terrorists, because otherwise the militants would continue their attacks.

© AFP 2021 / STAFF
Pentagon Refutes Russian Claims US Military Base in Syria Uses Refugees as Human Shield
According to Nasrallah, at the moment the Daesh controls only relatively small territory in Syria in the vicinity of the country's border with Iraq.

Syria has been in the state of civil war for over six years. The US-led coalition of more than 70 members is conducting airstrikes, ground-based and rocket-propelled artillery fire against the Daesh in Syria and Iraq. The coalition’s operation in Syria is not coordinated with Damascus. Russian military and diplomatic officials have previously repeatedly noted that the US side, which declared its goal to eliminate Daesh and defeat terrorists in Syria, proved the opposite with its actions.

The Russian Defense Ministry on Sunday published aerial photographs showing US Army special forces equipment north of the Syrian town of Deir ez-Zor, where Daesh militants are deployed. The ministry added that there were no signs of clashes in the area and that US servicemen appeared to feel "completely safe" in the areas controlled by terrorists. Moscow expressed hope that actions of the US-led coalition against Daesh are in accordance with their stated objectives.