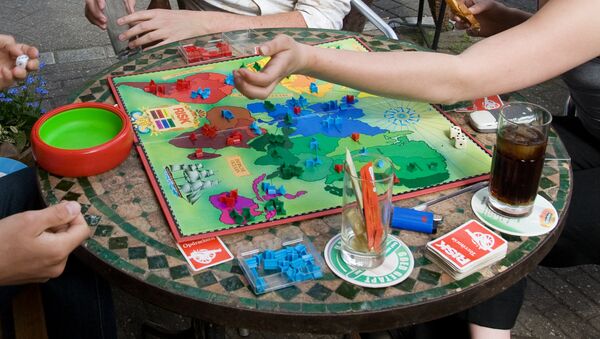 The game, created with the support of the Ukrainian Institute of National Remembrance, describes the Polish cities and towns of Przemysl, Chelm, Sanok, Siedlce and Zegiestow as ethnic Ukrainian lands. The apparent goal of the game is to move pieces along Ukraine's so-called 'ethnic borders', with the first player to finish being the winner.

​"We are already playtesting the board game 'One Hundred Years of Struggle: Ukraine's National Revolution of 1917-1921, which will be presented on October 13 at the istoriya.ua festival. The game will be interesting for both adults and children."

The game has led to controversy in Poland. Local media are concerned not just by its content, but by the fact that it is produced by Ukraine's Institute of National Remembrance, which has already been subject to significant criticism for its denial of the systematic murder and ethnic cleansing of Poles in western Ukraine by Ukrainian ultranationalists during the Second World War.

NATO's Dragon-17 Drills: 'Dangerous Dreamers Dreaming of Real War With Russia'
Asked to comment on the game, and why it is coming out now, Czeslaw Partacz, professor of modern Polish history, told Sputnik Polska that's part of the fevered nationalism which has taken over the country's political elite and academia.

"It has to do with the desire by Ukrainian nationalists to snatch up Polish territory," the academic explained. "They believe that if at least 5-6 Ukrainians live somewhere, it should be considered Ukrainian land."

Partacz plans to publish a new book later this year debunking these kinds of claims. "The Poles can also say that there are 368 Poles in Dnepropetrovsk and so this too should be considered Polish land," he joked. "This nationalist madness is akin to a severe and incurable mental illness. They [Kiev] cannot use or administer even what they already have. Basically, they are only able to destroy, and yet even this is not enough for them," he added.

Hungary Vows to Hinder Ukrainian Efforts at EU, UN Over 'Shameful' Education Law
The professor admitted that he wasn't exactly surprised by the appearance of this sort of board game, given the rewriting of history that's taking place in Ukraine. "There is a Mr. Novozhenets in Lviv who publishes delusional books in which Krakow [a city in southern Poland] is described as an ancient Ukrainian city, where Polish King John Sobieski, who defeated the Turks near Vienna, is described as really being a Ukrainian king."

On the one hand, these claims are laughable and ridiculous, Partacz said. On the other hand, however, such works "foment national hatred," and allow for arguments to be made in favor of seizing a neighbor's territories. In that regard, what is happening "is very dangerous," the observer stressed.

Asked why Warsaw has so far stayed silent on this and other initiatives by the Institute of National Remembrance, Partacz noted that unfortunately, Poland has a very strong pro-Ukrainian lobby, even in Poland's own Institute of National Remembrance. "For one reason or another, each of Poland's ruling parties, past and present, is subject to this influence. This is a disgrace and an embarrassment," the academic concluded.

000000
Popular comments
NATO country and NATO associated country going at each other's throats. Popcorn please!
mzungu in Africa
10 October 2017, 14:57 GMT2
000000
How big was Ukraine, before 1654? Lenin took Novorussia, gave it to Ukraine and it is now known as Eastern Ukraine. Stalin took Lyev, from Galicia, gave it to Ukraine as they go around insulting their Polish neighbours, with events of WWII. Krushchev, in 1954, took Crimea from Russia and gave it to Ukraine. Now Ukraine, whinges, moans and whines, that Russia is after it's territory (despite the fact that they have never ratified their borders with Russia since the fall of the Soviet Union, back in 1991 - they have ratified their European borders). Yet, it is Ukraine that is on a landgrab, no doubt not stopping at Poland. Sorry, as I laugh.
anne00marie
10 October 2017, 15:06 GMT1
000000
Newsfeed
0
New firstOld first
loader
LIVE
Заголовок открываемого материала
Access to the chat has been blocked for violating the rules . You will be able to participate again through:∞. If you do not agree with the blocking, please use the feedback form
The discussion is closed. You can participate in the discussion within 24 hours after the publication of the article.
To participate in the discussion
log in or register
loader
Chats
Заголовок открываемого материала
Worldwide
InternationalEnglishEnglishMundoEspañolSpanish
Europe
DeutschlandDeutschGermanFranceFrançaisFrenchΕλλάδαΕλληνικάGreekItaliaItalianoItalianČeská republikaČeštinaCzechPolskaPolskiPolishСрбиjаСрпскиSerbianLatvijaLatviešuLatvianLietuvaLietuviųLithuanianMoldovaMoldoveneascăMoldavianБеларусьБеларускiBelarusian
Transcaucasia
ԱրմենիաՀայերենArmenianАҧсныАҧсышәалаAbkhazХуссар ИрыстонИронауОssetianსაქართველოქართულიGeorgianAzərbaycanАzərbaycancaAzerbaijani
Middle East
Sputnik عربيArabicArabicTürkiyeTürkçeTurkishSputnik ایرانPersianPersianSputnik افغانستانDariDari
Central Asia
ҚазақстанҚазақ тіліKazakhКыргызстанКыргызчаKyrgyzOʻzbekistonЎзбекчаUzbekТоҷикистонТоҷикӣTajik
East & Southeast Asia
Việt NamTiếng ViệtVietnamese日本日本語Japanese中国中文Chinese
South America
BrasilPortuguêsPortuguese
NewsfeedBreaking
16:48 GMTHunter Biden Joked With Therapist Friend About Joe Biden’s 'Triumph Over Dementia,' New Book Claims
16:30 GMTUS Reportedly Plans Javelin Missile Delivery to Ukraine, Reneges on Surface-to-Air Missiles
16:26 GMTModi Gov't Reveals Why India Bought Russia’s S-400 'Triumf' Despite Threat of US Sanctions
16:14 GMT'Fake News and False Intelligence': China Hits Back at UK Spy Agency Chief Over 'Debt Traps' Remarks
16:10 GMTOSCE Ministerial Council: Pro-Western Figures in Spotlight, Growing Pressure on Russia, Belarus
16:00 GMTSpanish Lower House Recognises Animals as Sentient Beings
15:59 GMTIsrael’s NSO Reportedly in Covert Deal With Cyber Firm Trained to Exploit Security Weak Spots
15:54 GMTContacts Between Biden, Putin Can Calm ‘Overheated’ Relations, Russian Envoy Says
15:32 GMTScared of Misinformation? Beware of... Cute Cats, NYT Warns
15:00 GMTIndian Cricketer Virat Kohli's Dismissal in Second Test Match Against New Zealand Sparks Controversy
14:53 GMTIndia Deployed Warships at Forward Positions in IOR During Border Clashes With China: Navy Chief
14:52 GMT'Alternative' Mueller Report Could Be Released Soon
14:49 GMTRevealed: CIA Staffers Involved in Child Sex Abuse Crimes Dodged Prosecution Despite Evidence
14:01 GMTBritish Couple Who Killed Six-Year-Old Arthur Labinjo-Hughes Jailed
13:59 GMTWarsaw Expects New Afghan Migrant Flow at Border Organized by Minsk in Next Months
13:56 GMTLocked and Loaded: Man Ends Up With WWII Artillery Shell Stuck in His Rectum
13:41 GMTRussia's Arctic National Park Reports Disappearance of Peninsula on Franz Josef Land
13:33 GMTPakistan Says Its Serbian Embassy Accounts Hacked After Posts Criticising PM Khan Appear Online
13:33 GMTSri Lankan Factory Manager in Pakistan Beaten to Death by Mob For Alleged Blasphemy
13:06 GMTMossad Chief Vows Iran Will ‘Never Have’ Nuclear Weapons', Says ‘Bad Deal With Tehran ‘Intolerable’