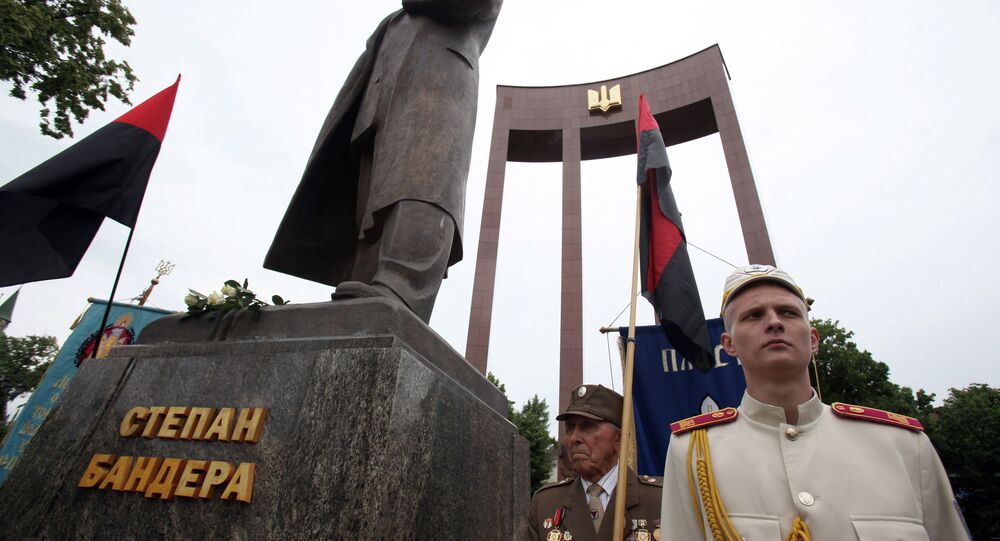 Ukrainian Nationalists Trying to Cover Up WWII-Era Crimes Against Poles

In response to Polish lawmakers' decision to officially recognize Ukrainian fascists' crimes against Polish civilians during WWII as genocide, Ukraine's parliament has drafted its own resolution, accusing Poland of carrying a genocide against Ukrainians. Now, a Ukrainian institute has organized a trip to Poland to visit 'ancestral Ukrainian lands'.

Earlier this month, Ukraine's parliament registered a draft resolution to commemorate the victims of an alleged "genocide committed by the Polish government against Ukrainians in 1919-1951."

The bill's text reads that Poland's declaration of independence in 1918 "caused great sorrow and disaster for hundreds of thousands of Ukrainians," adding that the history of Ukraine under Polish rule was "a history of the genocide of the Ukrainian people, systematically and consistently committed by the Polish state."

© REUTERS / Kacper Pempel
'They Just Can't Wait to Die as Heroes': Polish Leaders Brace Up for War With Russia
The resolution was put forward following the success of a Polish initiative to recognize Ukrainian nationalist insurgents' brutal wartime campaign of ethnic cleansing against Poles between 1943 and 1945 as genocide.

That campaign was orchestrated by the Organization of Ukrainian Nationalists-Ukrainian Insurgent Army (OUN-UPA), and targeted Polish, Jewish, Russian, and anti-fascist Ukrainians in the former Polish regions of Volhyn and Eastern Galicia. The fascists were estimated to have killed between 80,000 and 120,000 Poles, predominantly women and children, between 1943 and 1944.

Now, in addition with the Ukrainian parliament's initiative, the country's state-sponsored Institute of National Remembrance, known for its projects memorializing wartime fascist collaborators and pushing to ban all symbols of Ukraine's Soviet past, plans on staging a trip through what it says are "ancestral Ukrainian lands" in Poland. Institute director Volodymyr Vyatorovych explained that the action was necessary in order to to "create a sense of symmetry between the criminal acts of nationalists from both countries."

But the Poles are having none of it. Speaking to Sputnik Poland, Bohdan Pietka, a Krakow-based political writer and historian, emphasized that Vyatorovych's intentions were "dubious," to say the least. In fact, he noted, "no serious historian in the world…accepts the formulation" that Poland conducted genocide against the Ukrainians.

© Wikipedia
Historical Justice League: Russian MPs Propose Joining Poland in Condemning Ukrainian Fascists for Genocide
Moreover, Pietka said, "there is no symmetry between the actions of Polish and Ukrainian nationalists; on the contrary; there is a complete asymmetry." Factually, Pietka suggested that the Institute's effort was "anti-Polish."

"What I resent most of all is the lack of a response to this obvious provocation from the Polish government," the commentator noted. "In 2009, Ukrainian nationalist bikers planned a bike rally, called 'In the Footsteps of Stephan Bandera' [Bandera was a leader of the OUN], which was to stretch from Kiev to Munich, through Poland, including a stopover at the Auschwitz Nazi concentration camp. Then too Warsaw failed to react, and only the pressure from Polish society resulted in the rally being blocked at the border."

Now, the historian says, patriotic Poles need to react to this expedition as well, especially given the absurd claims by Ukrainian nationalists that Polish territory is "ancestral Ukrainian land."

"According to Ukrainian nationalists, these 'ancestral homelands' include the Podkarpackie, Lublin and Malopolska voivodeships, and if the Polish authorities do not see this obvious threat of Ukrainian nationalism, it's worth asking whether they represent the interests of their citizens, those of the Polish state, which they are constitutionally required to do."

© Sputnik / Grigoriy Vasilenko
Naming Roads, Burning Bridges: Kiev Loses Friends Glorifying Anti-Polish War Criminals
Recently, in a piece for Polish daily newspaper Nasz Dziennik, historian and lecturer Ewa Siemaszko warned that the contemporary Ukrainian state "is trying to extend the cult of OUN-UPA to the whole of Ukrainian society." Asked what this policy could lead to as far as Poland is concerned, Pietka stated unequivocally "Nothing good!"

"Imagine what would happen if the citizens of modern Germany decided to develop their society based on Hitler's ideology. Ukrainian [ultranationalism] was modeled after Hitlerism and Nazism. What would the world say if Germany began to revive the ideology of Hitler, and Italy that of Mussolini?"

In fact, Pietka suggested, "what's surprising is that Western Europe does is not reacting to what is happening in Ukraine. And Poland is to blame here in a big way, having served as an advocate for Ukraine" and its post-Maidan government. "I do not see anything good in the sowing of Nazi ideology in Ukraine. I can say frankly and openly: Ukraine is at risk of becoming an abscess on the body of Europe."

‘They Just Can’t Wait to Die as Heroes’: Poland Braces for War With Russia