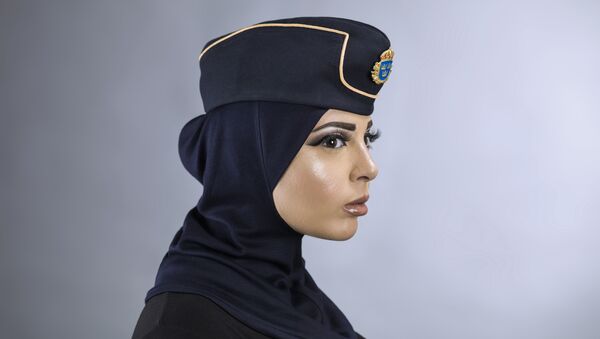 Amid a hot debate over whether it's acceptable for public servants and government officials to wear religious clothing, a Swedish designer has created uniform Islamic veils for the military and the fire department with the hope of encouraging Muslim women into those professions.

In 2011, Iman Aldebe created a stir by designing the first uniform veil for the Swedish police. The headdress was accepted despite the critical reaction, as many argued that the police should not send religious messages.

Now, the 32-year-old Jordanian-Swedish designer took a further step forward and has designed uniform Islamic veils to be worn by military personnel and firefighters, both of which turned out to be very optimistic about the idea, according to the Swedish newspaper Göteborgs-Posten.

"I've been in dialogue with them, as the veils must not pose any fire risks and the like. But they are very positive about this," Iman Aldebe told Göteborgs-Posten.

Swedish Feminist Defends Polygamy, Attacks Nuclear Family
According to Aldebe, many were upset when she launched the police uniform veil back in 2011, with critics accusing her of trying to Islamize Sweden or forcing women to wear religious garments. By Adlebe's own admission, however, it is a question of helping Muslim women getting introduced into Swedish society, becoming self-sufficient and alleviating their dependence on their Muslim spouses.

"I want to build bridges, so that nobody is left outside society or living off the state, which many Muslim women are accused of," Aldebe told the Swedish news outlet Nyheter24. "For me, Sweden stands for democracy and equality. I grew up in Sweden with that. To first say that they live off the state and then state that they are unwanted in these state professions would simply be wrong," she added.

​Additionally, Aldebe believes that the change of fashion may also contribute to a "more positive" image of Muslim women in society. A veil-clad policewoman produces an air of authority, she claimed. While Aldebe admitted that Islamic garments might be perceived as a strong statement, she also claimed that for hijab-wearers, it's about being like any other woman in Swedish society.

"For these women, it's only a garment. You put it on for religious reasons, but it's not like you're walking around and preaching. You just want to be like any other woman," Aldebe explained.

​So far, however, the new vogue does not seem to have contributed to any major change within the police. According to Göteborgs-Posten, the police still use the veil designed and introduced in 2011, though to a very small extent, because extremely few woman with corresponding needs work with the authority.

Religion Over Hygiene: Swedish Nurse Allowed to Wear Muslim Clothes Despite Ban
At present, it remains unclear when exactly the military and the fire department will buy the garment, which first has to meet demands for infrared reflection and fire safety.

Iman Aldebe was born in Uppsala into a Jordanian family and grew up in a Muslim environment. Her father Mahmoud Aldebe is the former chairman of the Muslim Association of Sweden (SMF).

Aldebe has been noted for her modernized variants of hijab designed for rescue personnel, as well as drugstore and hospital staff. In 2015, both she and her creations appeared in Hennes & Mauritz's autumn collection. Aldebe's veils have been sold in brand stores across Sweden, as well as in Paris, New York and Dubai.

​At present, Aldebe's works are being displayed at Norm Form, a so-called norm-critical exhibition, which takes place at the ArkDes museum in Stockholm.

Swedish Party Tires of No-Go Zones, Submits Hijab Ban for Better Integration
Earlier this year, several local municipalities in Sweden toyed with the idea of banning all religious garments for its officials, provoking a hot debate.