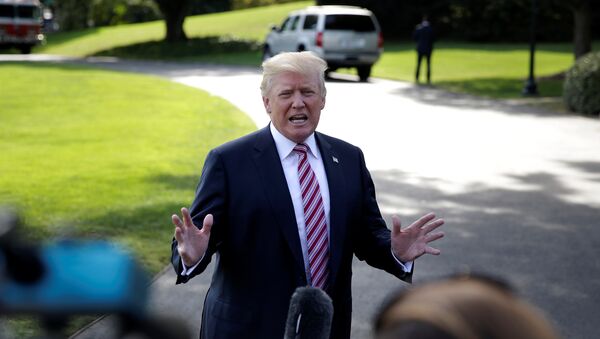 The Washington Post has reported that White House sources believe US President Donald Trump will not provide certification that Iran is following the 2015 nuclear deal, opening the door for a US exit from the deal and more intense sanctions against the Islamic Republic.

The 2015 Joint Comprehensive Plan of Action (JCPOA) meant to halt Iran's development of nuclear weapons (although Tehran has consistently denied that their nuclear program was ever meant to yield weapons) in exchange for sanctions relief requires the US president to "certify" that Iran is abiding by the agreement every 90 days.

In a statement on Thursday night, Trump said that Iran has "not lived up to the spirit of their agreement and will be discussing that tonight." He added that he would be discussing options with military leaders that evening.

Trump has reluctantly declared Iran compliant twice before, but frequently threatened to do otherwise. The next deadline is on October 15. The anonymous White House sources say that Trump is most likely going to declare Iran noncompliant, citing US national interest.

However, Trump's refusal to certify Iranian compliance does not necessarily mean the deal is scrapped. Should Trump de-certify Iran, the issue would then bounce to Congress and they have 60 days to decide how many, if any, sanctions that were paused by the JCPOA should resume. Only if they decide to resume sanctions would the US would have to exit the agreement.

Trump's speech is tentatively scheduled for October 12, and will take a hardline stance against the Islamic Republic. However, Trump has repeatedly pushed for the JCPOA, "the worst and most one-sided transaction Washington has ever entered into" as he described it during his United Nations General Assembly speech, to be renegotiated instead of discarded entirely. As such, Trump is expected not to recommend for Congress to reimpose sanctions and exit the agreement just yet, report White House sources.

But a renegotiation seems unlikely. It takes two to tango, and Iranian leaders dismissed the possibility of an exit, with Iranian President Hassan Rouhani telling the press on September 21 that it would be a "waste of time" to do so.

World
Iran May Abandon Nuclear Deal If US Withdraws

"We held negotiations for many years on [the JCPOA]… but today the Americans talk of leaving the deal. So why should negotiations on other issues be held [with the US]?" Rouhani asked reporters after his speech at the UN General Assembly.

It isn't just Iran and the US — five other countries signed the JCPOA, too: China, France, Germany, Russia and the United Kingdom. The leaders of all five have implored the Americans to remain within the agreement, with French President Emmanuel Macron and UK Prime Minister Theresa May both attempting to convince Trump in person to declare Iran compliant — reportedly, both in vain.

German Foreign Minister Sigmar Gabriel told US Secretary of State Rex Tillerson on Sunday that leaving the Iran deal may harm the prospect of nuclear disarmament in an entirely different part of the world. "If the US cancelled its nuclear deal with Iran, that would undermine the credibility of its offer to North Korea," Gabriel said, according to Press TV.

'Without Inspections, Iran Deal Is Empty Promise' - US Envoy to UN

"I want to stress that the Joint Comprehensive Plan of Action (JCPOA) is an important outcome of multilateralism," said Chinese Foreign Ministry spokesperson Lu Kang during a September press conference. "It is a model of resolving international hot-spot issue through political and diplomatic means."

Russian President Vladimir Putin has also thrown his support behind the JCPOA, saying at a Wednesday speech at the Russian Energy Week-2017 international forum that "all reports of the International Atomic Energy Agency (IAEA) say that Iran fully meets all its commitments. We are guided by these considerations and will back the deal, which was brokered under the previous US administration, although we had many differences on other issues."

Even members of Trump's own cabinet have publicly defended the JCPOA. "At this point in time, absent indications to the contrary, it is something the president should consider staying in," said US Defense Secretary James Mattis before Congress on Tuesday, adding that the pact was beneficial to national security.