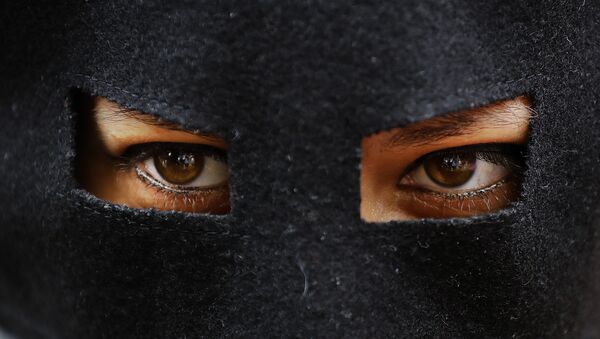 Austria's ban on Islamic full-face veils has come into effect, hailed as a victory by those concerned with Muslims' lack of drive toward assimilation. But some observers say the ban could become as just another administrative issue for police to deal with, while its extension to medical and carnival masks calls into question its true purpose.

The law prohibiting full head and face coverings including the burqa and the niqab came into effect on Sunday. Violators, including both locals and tourists, can face fines of up to 150 euros if they refuse to comply. Austria's government says the ban is aimed at "ensuring social cohesion in an open society," and that "acceptance and respect of Austrian values are basic conditions for successful cohabitation between the majority Austrian population and people from third countries living in Austria."

Speaking to Sputnik Germany, Norbert Leonhardmair, a research fellow at the Vienna-based Center for Social Research, said that whether the law is good or bad thing, enforcing anti-face veil laws shouldn't be a burden for the police.

Show Me Your Face! Majority of Danes Support Ban on Islamic Headwear
According to Leonhardmair, police already have enough on their plate, and could do without the additional administrative task of mandating women's clothing.

Neither does the ban help much the fight against terrorism, Leonhardmair insisted. However, security was never the top concern in the first place, according to the expert. The Austrian government justified the ban based on its desire to improve communication between people in public places. "But the task of the state is not to establish models by which people will communicate with each other in public places," Leonhardmair said, adding that not every social problem can be resolved through prohibitions.

On the contrary, the new law entails a series of new problems, he said. For example, in order to avoid accusations of racism or cultural and social discrimination, the ban also includes things like balaclavas and ski masks, and elaborate disguises. Even clown costumes are now restricted for use only during cultural events.

Ultimately, Leonhardmair insisted that there is no easy "prescription for emancipation," and the goal of creating the conditions in which people will be prepared to take off their veils "is the task of society, not the police."

Make Way for the Ladies: Nordic Muslims Disagree on 'Feminist Islam'
Austria's move to ban the facial veil places it alongside some other Western European countries, including France, Belgium, and the Netherlands, which have placed a number of restrictions on the burqa and niqab in public places over recent years.

Vienna's move has sparked a lively debate on social media, with some users from Austria and other countries showing support for the move, with others citing minority rights concerns.

If #Austria can ban face veils why can't the UK.. #Bluehand

Retweet if you think this ban should come into force here too. https://t.co/rmzJepzS8M

Austrians will go to the polls later this month for national elections where the anti-immigration Freedom party is expected to do well, possibly entering a coalition with Foreign Minister Sebastian Kurz' center-right Austrian People's Party, which was instrumental in drafting the anti-burqa bill.