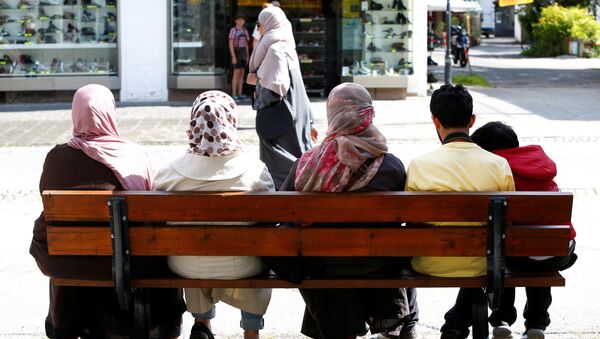 With the acceptability of face-covering Islamic clothing in public places being among the most divisive issues in Europe, a majority of the Danish population supported a ban on both the burqa and the niqab in a recent survey.

A recent survey carried out by pollster Epinion on behalf of Danish Radio indicated that only less a quarter of the Danes (23 percent) believe that full Islamic headdress should be permitted in the Nordic country.

Conversely, 62 percent of the Danes supported the ban on wearing one of the two face-covering types of Islamic veil in public. Another 12 percent responded "don't know," while three percent declined to answer the question altogether.

The discussion about face-covering headgear is a recurrent issue in Danish politics, and the upcoming autumn 2017 parliamentary session appears to be no exception, as the right-wing eurosceptic Danish People's Party (DF) is all set to propose a ban on the burqa and the niqab for the fourth time in recent years.

"This is very uplifting. It shows that the debate is moving forward, meaning that other parliamentary parties are also catching on. At least I hope they are," Martin Henriksen said.

Denmark's other right-of-center parties have various opinions on this matter. While the Conservatives support the ban, the Liberal Alliance is against it, whereas government heavyweight the Liberals remains undecided, with some of its MPs being supportive of the ban.

As for the opposition parties, Social Democrat party leader Mette Frederiksen previously admitted to being prepared to discuss a potential ban.

Social Democrat MP Mattias Tesfaye, who is also a member of the parliamentary committee on immigration, told Danish Radio that he was by no means surprised by the results of the poll.

"I feel provoked myself whenever I see a woman in a burqa. Not so much by the woman herself, but instead by what the veil stands for. I actually perceive it as a form of prison," Mattias Tesfaye said, admitting that his party has not yet clarified its position.

'Wardrobe Malfunction': Islamic Council Norway Hires Niqab Backer to Top Role
A ban on the burqa was previously rejected in Denmark as violating the country's constitution. Nevertheless, a ban has become a more viable possibility since a ruling by the European Court of Justice entitling employers to ban workers from wearing headscarves earlier this year.

In 2016, an adult education center in the Copenhagen suburb of Lyngby ordered six female students to remove their niqabs in order to attend classes, which triggered a hot debate in Denmark. Despite some criticism, opinion polls by Metroexpress and Extra Bladet showed that an overwhelming majority of readers backed the school, which was also supported by the Liberals, the Conservatives and the Danish People's Party.

While critics of the ban argue that it would only contribute to the further isolation of women wearing the two types of veil from Danish society, the actual number of niqab- or burqa-wearers remains unknown. A 2010 government report estimated their number at between 150 and 200, with the majority of the cases preferring the niqab. Niqabs have a slit through which the wearer's eyes can be seen, while burqas cover the face entirely, with the wearer seeing through a mesh in the material.

Denmark Hit by Hack Attack in Rekindled Muhammad Cartoons Controversy
Incidentally, a Danish modeling agency proudly announced last week that it had hired the country's first hijab-wearing model. By contrast, the hijab only covers the head and the shoulders, yet leaves the face open.

At present, France and Belgium are the only two countries to have banned Muslim veils nationwide, but parts of Switzerland, Italy and Spain have also banned burqas and niqabs at the local level.

Do you know the difference between a #burqa & a #niqab? A #chador and a #hijab? The #burkini furor in #France. pic.twitter.com/8fBclsYnW4