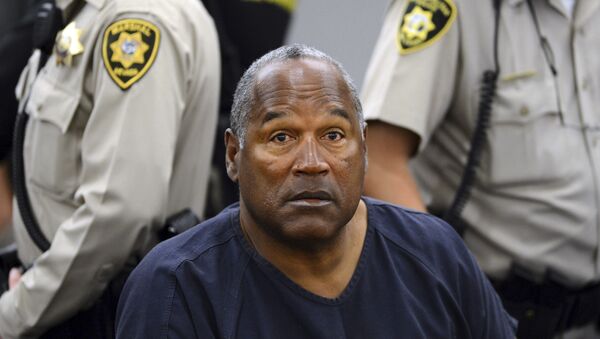 Simpson, now 70, was charged with armed robbery after raiding two sports memorabilia dealerships at a Las Vegas casino hotel in 2007. According to the former star, the items he was attempting to steal belonged to him.

Simpson said, "When I came into the [hotel] room I noticed spread out everywhere was my personal property," ABC news reported.

"The only thing I saw that was on display that wasn't mine was some baseballs, and I made it clear to everybody those are not mine. All I want is my property…. I wasn't there to steal from anybody," Simpson added.

Over 20 years ago, in what was dubbed the "Trial of the Century," Simpson was cleared of charges that he had murdered ex-wife Nicole Brown Simpson and her friend Ron Goldman in a high-profile case that captivated the nation.

However, in a 1997 civil trial, Simpson was found liable for the murders and a court ordered him to pay $33.5 million in damages to the victims' families. To this day, Simpson contends he is innocent.

In a statement last week, Freed and Kim Goldman, Ron Goldman's father and sister, respectively, claimed that they will continue going after the money awarded to them in the trial, which is now estimated to be some $60 million.

"While we respect the Nevada Parole Board's decision to release Simpson, it's still difficult for us knowing he will be a free man again," the Goldmans said.

​"We will continue pursuing the now $60 million judgment awarded to our family after the [civil trial] jury found that Simpson willfully and wrongfully caused the deaths of Ron and Nicole, as well as remain dedicated in our commitment to domestic violence awareness, victim advocacy and judicial reform."

"It was never about the money [in the civil case.] It was punishment, and we didn't have the opportunity to see him go to jail or death row for murder, but he got a judgment against him and honoring that judgment or making him honor the judgment is the only punishment that we can get from him," the senior Goldman explained on "Good Morning America" after the parole hearing.

According to the parole board, Simpson adhered to prison rules during his time behind bars and poses a minimal risk to the public.