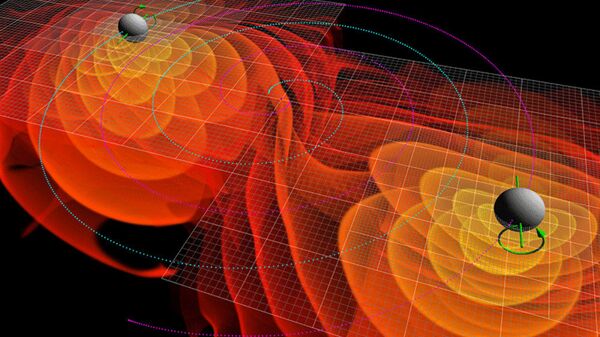 © NASA . Ames Research Center/C. Henze
Subscribe
Two billion light-years from Earth, a pair of black holes collided - and the resulting release of energy was so massive that we can measure the ensuing gravitational waves here, on the other side of the universe.

For the fourth time, scientists at the Laser Interferometer Gravitational-wave Observatory (LIGO) have detected gravitational waves — ripples in spacetime — created by a collision which has been named GW170814.

The incident happened 1.8 billion years ago, 1.8 billion light-years from the Milky Way Galaxy. The black holes were small by black hole standards, which is to say they were 25 and 31 times as large as our sun, respectively. When they met, they combined into a larger black hole approximately 53 times as massive as our sun.

So titanic was this collision that instruments on our planet picked it up despite the massive distance. This makes it the fourth-ever detection of gravitational waves. "It is tantalizing to see this new story of how black holes formed and evolved through history of the cosmos," Sheila Rowan of Glasgow University told BBC News.

The signal was detected by a system of lasers that endlessly run through a miles-long vacuum sealed tunnel constructed by LIGO. Sensors monitor the laser for minute movements caused by changes in the fabric of space-time. The beam shifted about one thousandth of the length of a proton, or one quintillionth of a millimeter.

LIGO then works backwards to discover the location and event of the source of the gravitational waves through the use of their observatory.

LIGO's detection of gravitational waves for the first time ever in September 2015 was the climax of almost a century of searching. Albert Einstein predicted the existence of gravitational waves, ripples in spacetime caused by the movements of massive objects, in 1916, but it would take astronomy 99 years to prove his theory accurate.

Since then, gravitational waves have been detected by LIGO on three more occasions, with the most recent find adding to our understanding of the phenomena. The third gravitational wave discovery was of particular interest because it raised many questions as to how black holes form in the first place.

"This is just the beginning of observations with the network enabled by Virgo and LIGO working together. With the next observing run planned for late 2018, we can expect such detections weekly or even more often," said David Shoemaker, a physicist at the Massachusetts Institute of Technology and spokesperson for the LIGO collaboration to The Guardian. Virgo is a similar and associated project to LIGO operated by Italy and France.