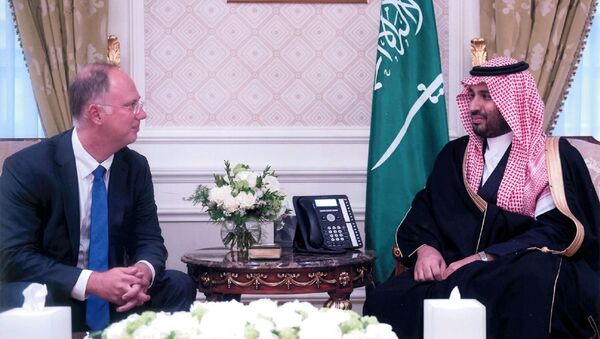 © Photo : RDIF
Subscribe
The upcoming visit of Saudi King Salman Al Saud will demonstrate the extent of bilateral relations between Moscow and Riyadh and can definitely be called historic. Both countries being oil producers work closely in the energy sector and seek to enhance investments.

MOSCOW (Sputnik) — The Russian Direct Investment Fund (RDIF) and its partners from Saudi Arabia will announce creation of a new investment platform in energy sphere during the visit of Saudi King Salman Al Saud to Russia, RDIF CEO Kirill Dmitriev said on Tuesday.

"Within the framework of the visit of the King of Saudi Arabia to Russia, the RDIF with Saudi partners will announce the creation of new investment platform in the energy sectors, as well as investments in the industrial and infrastructure sectors," Dmitriev told reporters.

He also added that RDIF with Saudi partners was in the final stage of negotiations on major Russian projects in Saudi Arabia.

The Kremlin and The Kingdom: The Russian-Saudi Rapprochement
Dmitriev expressed certainty that the work during the visit "will boost the opportunities for cooperation between our countries in a wide range of areas."

The RDIF head reminded of the OPEC+ agreement on oil production cuts, which he called the "largest joint achievement of Russia and Saudi Arabia, which together provide about a quarter of world oil production."

"Significant results have been achieved in the area of investment cooperation in the framework of a joint $ 10 billion platform created by sovereign funds of RDIF and PIF [Saudi Arabia's Public Investment Fund]. Saudi investors have already implemented a number of projects in Russia with high profitability in such sectors as petrochemicals, infrastructure, logistics, hydropower and others," Dmitriev added.

In late 2016, OPEC and 11 non-cartel oil producing countries agreed to cut oil output by a total of 1.8 million barrels per day from October's level to support oil prices, with Russia, which is not OPEC member, pledging to cut production by 300,000 barrels daily. In May, the agreement was extended by nine months and is now valid through the end of March 2018.

Earlier in the day, Russian Deputy Foreign Minister Mikhail Bogdanov confirmed that the visit of King Salman Al Saud would take place in early October. In September, a source told Sputnik that the visit was set for October 4-7.

Dmitriev believes that the visit of The Custodian of the Two Holy Mosques, King Salman bin Abdulaziz Al Saud of Saudi Arabia for the first time in almost a hundred years of Saudi-Russian relations is a historic event that will continue the development of a strategic partnership between Moscow and Riyadh. He also believes that a significant role in strengthening relations was played by the visits of the Crown Prince of Saudi Arabia, Mohammed bin Salman, to Russia.