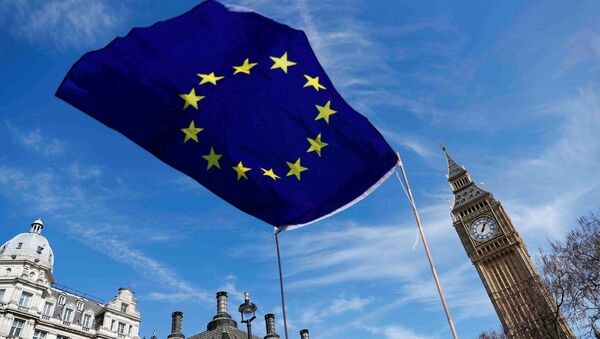 © REUTERS / Peter Nicholls/File Photo
Subscribe
The UK prime minister proposed a two-year-long transition period at the end of which Britain will leave the EU.

"During the implementation period, people continue to be able to come and live and work in the UK but there will be a registration system, an essential preparation for the new regime," Theresa May said in Florence on Friday. "These considerations point to an implementation period of around two years."

In March 2019, Britain will cease being an EU member but wants to keep friendly relations with the bloc, May stressed.

The third round of Brexit talks between the UK and Brussels was held in early September. According to UK Secretary of State for Exiting the European Union David Davis, the parties have managed to achieve "concrete progress." However, Barnier has repeatedly expressed skepticism over the lack of progress. In late March, the United Kingdom officially launched the EU withdrawal process. The Brexit negotiations between London and Brussels started on June 19.

000000
Popular comments
It's not what the people voted for, the people vote to BREXIT in 2 years. Time to expel the Government, they are clearly HOODWINKING the UK people.