China Has Reason to be Jittery About Indo-Japanese Geniality 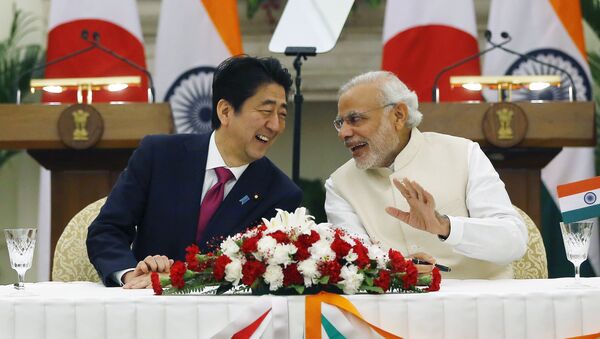 Experts are optimistic that the counterweight presented by increased Indian and Japanese cooperation may make China more sensitive to international norms.

New Delhi (Sputnik) — The grand hospitality extended by India to Japanese Prime Minister Shinzo Abe, the kick-starting of ambitious long-term joint projects and the trilateral talks of foreign ministers of India, Japan and the US on the sidelines of the UN General Assembly, have clearly ruffled China's feathers, with its media mincing no words in deploring the India-Japan bonhomie.

Experts in international relations keeping a close watch on the developments say China has strong reasons to be uneasy about developments between India and Japan over the past month.

"China surely has to worry about India and Japan coming closer. Both Japan and India have been historically suspicious of China's intentions. These anxieties have been reinforced by recent Chinese behavior," professor Swaran Singh of the School of International Studies at Jawaharlal Nehru University told Sputnik.

Singapore PM Travels to China to Smooth Over Embattled Relationship

What could have irked China the most was the agreement between India and Japan to enhance maritime cooperation in the Indo-Pacific region during Abe's visit to India last week.

Moreover, the US has also jumped in, sharing India and Japan's concern over China's One Belt One Road (OBOR) initiative. During the talks between Indian External Affairs Minister Sushma Swaraj, US Secretary of State Rex Tillerson and Japanese Foreign Affairs Minister Taro Kono at the UNGA on Monday, concerns were raised over OBOR, with the US backing the argument that connectivity initiatives must not sabotage the sovereignty and territorial integrity of countries.

China's displeasure can be gauged from its strong opposition to proposed Japanese investments in road and electricity infrastructure in India's northeastern states. Experts say China is wary of India's connectivity and infrastructure projects in the northeastern region as they are viewed largely as a countermeasure to China's similar projects with Pakistan in disputed Kashmir.

"China reads the developments as an Indian response to their involvement in building infrastructure as part of the China-Pakistan Economic Corridor in Pakistan-occupied Kashmir. Otherwise, China welcomed India getting a bullet train from Japan because the boom in Indian rail infrastructure is also opening projects by China in India," Singh said.

Both Japan and India are also close friends of the United States, which sees its global leadership being challenged by rising China. In this backdrop, Japan and India's coming closer relationship surely raises concerns in China. Especially India-Japan partnership in the Asia-Africa Growth Corridor launched recently goes beyond strengthening their bilateral relations and is seen in competition with China's Maritime Silk Road initiative, he added.

Experts are optimistic that the Indo-Japan counterweight may make China more sensitive to international norms.