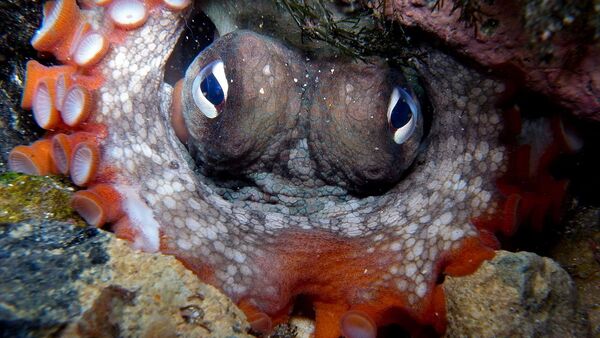 Scientists have discovered a congregation of some 15 common Sydney octopuses (also known as gloomy octopuses or octopus tetricus) dwelling together, communicating and even evicting each other from dens in a compact area on the bottom of Jervis Bay off the coast of Australia.

Video footage filmed by a team of marine biologists led by Alaska Pacific University professor David Scheel, at the site they named Octlantis, shows these gloomy octopuses exhibiting complex social behavior, apparently disproving the previously predominant belief that these cephalopods are loners who only meet each other to mate once a year.

Mysterious Creature 'Out of a Horror Flick' Washes Up on Texas Beach (PHOTOS)
"These behaviors are the product of natural selection, and may be remarkably similar to vertebrate complex social behavior. This suggests that when the right conditions occur, evolution may produce very similar outcomes in diverse groups of organisms," Scheel told Quartz.

According to Professor Scheel, while gloomy octopuses have apparently turned out to be not as solitary as it was previously believed, congregations like Octopolis or Octlantis probably aren’t very common and occur "wherever shelter is limited to small patches of habitat, and food is plentiful."

"For these complex behaviors to occur, I think that they must encounter one another and interact regularly over generations, even if at any time there are more octopuses living a solitary life than interacting consistently throughout every day," he surmised.

In 2009 one other similar gloomy octopus congregation was found by scientists also on the bottom of Jervis Bay. Named Octopolis, at the time of its discovery the site was considered an anomaly.