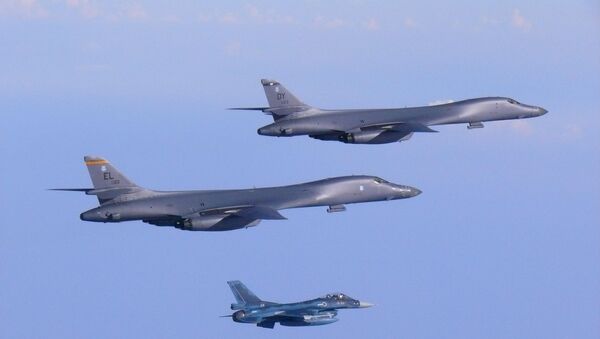 The US has “pretty much exhausted all the things that we can do at the [UN] Security Council at this point,” Nikki Haley, US Ambassador to the UN, said Sunday regarding North Korea’s continued missile tests, adding she would be “perfectly happy” to pass the situation onto Pentagon chief James Mattis who has “plenty of military options.”

Haley’s warning comes in stark contrast made by former US state department officials who say there’s still room to engage North Korea diplomatically. Pyongyang’s military has conducted three ballistic missile tests since US President Donald Trump told reporters the country would be met with “fire and fury and, frankly, power, the likes of which the world has never seen before” if it kept up threats to the US and its allies.

Four US Marine Corps F-35 joint strike fighters and two US Air Force B-1B Lancer strategic bombers zipped through South Korean airspace with South Korean and Japanese fighters in a “sequenced bilateral show of force” on September 17 in retaliation to North Korea’s September 14 ballistic missile test, according to a US Pacific Command statement.

While there has been a great deal of media attention surrounding the Lancer’s technical ability to carry nuclear weapons, the US military’s fastest bombers are inspected annually by Russian experts to ensure all B-1Bs are compliant with the Cold-War era Strategic Arms Reduction Treaty, which bars them from carry nukes. Defense officials told Military.com in July the plane “will never be a nuclear-capable bomber again.”

South Korean F-15Ks and Japanese F-2s accompanied the US planes, the statement said. The warplanes fired live rounds to demonstrate the allied air forces readiness to “respond to any threat in the Indo-Asia-Pacific theater at a moment’s notice,” Capt. Cassandra Gesecki said, writing from Camp H.M. Smith in Hawaii.

In light of North Korea’s failure to live up to denuclearization pledges made to Japan, South Korea, the US, China and Russia in 2003 and “its continuing missile launches and nuclear tests,” Japanese Prime Minister Shinzo Abe wrote in a Sunday New York Times column, “more dialogue with North Korea would be a dead end.”

"I stress that we must not be simply complacent with the adoption of these sanctions," the prime minister said, adding, "We must thoroughly enforce the successive resolutions in order to prevent North Korea from obtaining the goods, technologies, funds and people to further develop its missiles and nuclear program.”

One of Pyongyang’s most consistently-used tactics to soften the impact of sanctions is to sell North Koreans as forced laborers in other places around the world. North Korean slaves are exploited in more than 45 nations, “including the European Union, and entrails the exploitation of between 100,00 and 200,000 individuals,” military historian Joseph V. Micallef wrote in July.