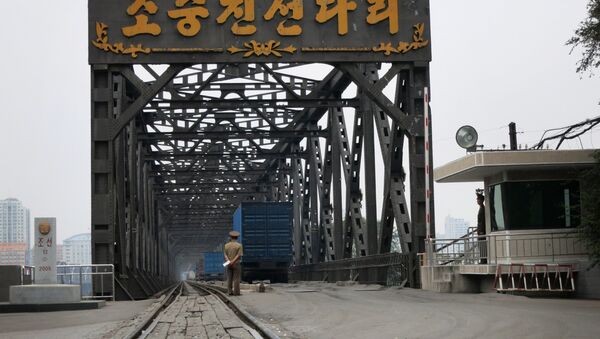 © AP Photo / credited to AP
Subscribe
Sanctions against Pyongyang have barely stopped the nation from going on with the development of weapons of mass destruction, as well as the sale of its own military hardware to other countries. In a detailed report, the South China Morning Post summarized several means by which Pyongyang avoids the international obstacles to trade and commerce.

Earlier this week, the US Treasury Department disclosed before Congress that the People's Democratic Republic of Korea (DPRK) used a spy-movie scheme to sell coal as international trade is increasingly constrained by UN sanctions. According to the US Treasury, Russia plays a major role in Pyongyang's sanction workarounds, while China is seen to be backing away from its unruly neighbor.

Get Out and Stay Out: US Tells Kuwait to Kick Out North Korea Ambassador
First, North Korea has developed a practice of direct barter, instead of using currency payments. DPRK coal, the nation's primary export, substitutes for currency in many transactions as. where there is no currency payment, there is no record of an exchange. This also comes in handy as the North Korean national currency — the won (KPW): trading about 1000 to one US dollar — has been devalued to the point that some Pyongyang department stores insist on payment in dollars, euros or Chinese renminbi, according to the Washington Post.

According to the US Treasury, Chinese businessman Chi Yupeng allegedly used his company Dandong Zhicheng Metallic Materials to buy steel and anthracite coal from North Korea in exchange for nuclear and missile components.

But before the Koreans can trade the coal, they need to have it delivered. Testifying before US House Foreign Affairs Committee, Assistant Treasury Secretary for Terrorist Financing Marshall Billingsley unveiled a smuggling scheme that would make a cool movie.

According to their report, Chinese vessels turn off navigational transponders that allow them to be tracked remotely halfway to North Korea. Then the ships go to Korean ports and load coal, which the US Treasury allegedly proved using satellite photos. After that, ships return to the same point where they switched their transponders off, re-activate them and head toward Russia.

According to the Philippines' Manila Bulletin news website, South Pacific nations took action after Fiji claimed that it had identified at least 20 ships flying Fijian flags but with no registration. The Bulletin quoted New Zealand's Foreign Affairs Minister Gerry Brownlee saying that Pacific countries, including his own, are concerned that the DPRK is using falsely-flagged cargo ships as an avenue to trade goods to get around sanctions. Now 18 states are set to launch a joint audit of every ship registered in the Pacific, searching for ties to Pyongyang.

"What we do know is that declared North Korean GDP (gross domestic product) is not big enough to support the nuclear program that they're running so there has to be significant black market or offbook revenue going into the country," Brownlee said.

Further Pressure May Provoke 'Unpredictable' Response From North Korea
Aside from maritime trading, there are about 100,000 North Korean nationals who work abroad and generate a stable income of about $500 million for their motherland.

The SCMP report describes the Mansudae Overseas Project, a group of construction companies noted by the UN as generating dollar revenue for Pyongyang.

In addition, the DPRK uses front companies that set up bank accounts, enabling Pyongyang to obscure international bank transfers. The SCMP quotes a UN report claiming that Glocom, a North Korean company that manufactures military communications devices, used a number of front companies that have themselves been used to make payments to clients.

"A single invoice was often settled through a series of small transactions," the report noted.

A variation of this method involves diplomatic workers opening multiple bank accounts — sometimes for themselves, sometimes in the name of the front companies.

Pyongyang has been surprisingly successful in international weapons sales. According to the SCMP, North Korea manufactures and sells weapons, and even provides military training services to many nations, particularly on the African continent.

US Threats to Stop Trade With China Over North Korea Nothing But 'Blackmail'
Pyongyang is also suspected of modifying non-military equipment, legally enabled for trade, to military purposes. According to the media outlet, photos and video from a military parade in Pyongyang in April show that trucks purportedly carrying nuclear missiles displayed Sinotruk logo on the fuel tank.

Sinotruk is a Chinese truck manufacturer that confirmed the sale of civilian trucks to the DPRK, but denied allegations of military cooperation.

Bernardo Mendes
18 September 2017, 11:12 GMT1
000000
Of course North Korea will do all it can to evade US sanctions. North Korea is only a theat to those countries that threaten it. Further, why would any country that is under any kind of US sanctions, threat or which has felt the weight of the US boot feel any obligation to support the US sanctions against North Korea? To be clear, these are NOT UN sanctions, they are US sanctions forced upon the UN under threat, sanctions that most of the world would not support if not for the US threat. Looking at the list of countries that are supposedly supporting North Korea, these are mainly poor countries abandoned by the western world, these trades with North Korea are clearly economically beneficial to them - many of them have felt the weight of the US boot in the past and see no obligation for solidarity with the US vis a vis North Korea.
Erik Trete
18 September 2017, 12:12 GMT2
000000
Newsfeed
0
New firstOld first
loader
LIVE
Заголовок открываемого материала
Access to the chat has been blocked for violating the rules . You will be able to participate again through:∞. If you do not agree with the blocking, please use the feedback form
The discussion is closed. You can participate in the discussion within 24 hours after the publication of the article.
To participate in the discussion
log in or register
loader
Chats
Заголовок открываемого материала
Worldwide
InternationalEnglishEnglishMundoEspañolSpanish
Europe
DeutschlandDeutschGermanFranceFrançaisFrenchΕλλάδαΕλληνικάGreekItaliaItalianoItalianČeská republikaČeštinaCzechPolskaPolskiPolishСрбиjаСрпскиSerbianLatvijaLatviešuLatvianLietuvaLietuviųLithuanianMoldovaMoldoveneascăMoldavianБеларусьБеларускiBelarusian
Transcaucasia
ԱրմենիաՀայերենArmenianАҧсныАҧсышәалаAbkhazХуссар ИрыстонИронауОssetianსაქართველოქართულიGeorgianAzərbaycanАzərbaycancaAzerbaijani
Middle East
Sputnik عربيArabicArabicTürkiyeTürkçeTurkishSputnik ایرانPersianPersianSputnik افغانستانDariDari
Central Asia
ҚазақстанҚазақ тіліKazakhКыргызстанКыргызчаKyrgyzOʻzbekistonЎзбекчаUzbekТоҷикистонТоҷикӣTajik
East & Southeast Asia
Việt NamTiếng ViệtVietnamese日本日本語Japanese中国中文Chinese
South America
BrasilPortuguêsPortuguese
NewsfeedBreaking
15:34 GMTIsraeli Scuba Diver Discovers 900-Year-Old Crusader Sword
15:29 GMT'I Wanted to Go Down With the Crowd': Trump Thinks He Would've Stopped Capitol Rioters, Book Reveals
15:25 GMTFBI Reportedly Raids Washington Home of Russian Billionaire Deripaska
15:20 GMTBollywood Star Yuvika Chaudhary Briefly Arrested for Using 'Casteist Slur' in Viral Video
15:16 GMTUK Stops US Firm Buying British Defence Contractor on 'National Security Grounds'
14:55 GMTChina Calls for Restraint After New North Korean Missile Launches
14:50 GMTUK Risks Drought, Water Shortages Because of Climate Change, Environment Agency Chief Warns
14:47 GMTGreece, Cyprus, Egypt Jointly Condemn Turkey's 'Illegal Activities' in Eastern Mediterranean
14:42 GMTRussian Watchdog Warns Google May Face Revenue-Based Fines
14:33 GMTThe Z Factor: Why Maverick Eric Zemmour is Making Early Running in French Presidential Race
14:27 GMTManchester Arena Bomber’s Brother Leaves UK Ahead of Planned Appearance at Inquiry
14:24 GMTUK Parliament Closes Loophole That Allowed Sex-Pest MP to Keep His Seat
14:17 GMTREC: 20+ Russian Exporters Participate in Business Mission to Armenia
13:55 GMTEx-CIA Director Petraeus Gives Evidence Before UK Parliament Amid Inquiry Into Afghan Policy
13:37 GMTFans Slam Ex-England Star Carragher as He Drops Ronaldo From His Combined Man United & Liverpool XI
13:31 GMTOnline Fury as Fox News Host Tweets Powell Death Fuels 'New Concerns' About COVID Vax Efficacy
13:23 GMTBJP Stages Protest After Party Member Shot Dead in West Bengal
13:17 GMTMicrosoft Execs Warned Bill Gates Against 'Sending Flirtatious Messages to Female Staffer in 2008'
13:10 GMTUK Police Were ‘Reluctant To Investigate’ Former Labour MP Accused Of Sex Crimes
12:52 GMTPoland Deploys 6,000 Soldiers to Guard Border With Belarus