A Seat at the Table: What Happens When the Bloody Syrian Civil War Ends? 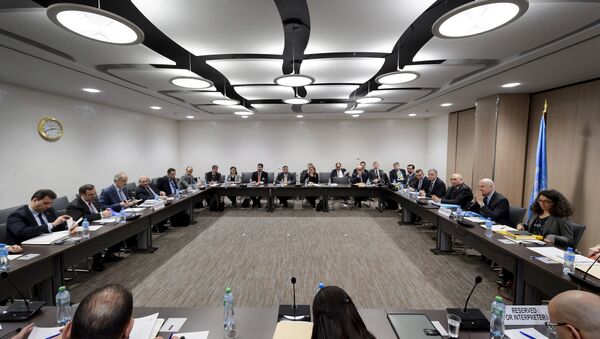 After six and a half years of bloody, bitter fighting, the Syrian Civil War seems to be drawing to a close as the death knell tolls for Syrian rebel groups and Daesh, leaving the majority of the country in the control of President Bashar al-Assad and of US-backed Syrian Kurds.

Brian Becker and John Kiriakou, co-hosts of Sputnik Radio's Loud & Clear, spoke to Peter Ford who served as the British ambassador to Syria from 2003 to 2006. Ford, a supporter of the Assad government and frequent critic of the British support for anti-Assad rebel groups, discussed what will become of various factions now that the war is reaching its final stages.

Up first: Daesh and other Islamist militant groups. Ford reminds Becker and Kiriakou "Many of the fighters were foreigners. Many have been killed, many have fled borders into Iraq and Jordan, and the remaining probably number only about ten thousand in all. Not many of them will be fit for reabsorption into Syrian society, but there are other groups [such as] the al-Nusra Front, the al-Qaeda affiliate which is probably as powerful as Daesh and which controls the Idlib province up in the Northwest. They're mostly Syrian, and they will be an even harder nut to crack. They will crack, but it's going to take a big push."

But even if Daesh and its affiliate groups are doomed, they're far from the only opponent of the Syrian regime. An uneasy ceasefire between Assad loyalists and Syria's Kurdish minority has held in the past few months, but eventually they will meet, said Ford. "It's unlikely that the government will turn its guns on the Syrian Kurdish Peshmerga but we're approaching something of a crisis point in that regard in eastern Syria, where both the Syrian Kurds and the government forces are heading east, mopping up the remnants of [Daesh.] There is scope for clashes there. The Kurdish areas represent about 23 percent of the territory, there's no way the Syrian government would acquiesce on that part breaking off from Syria.

"Basically, the Syrian Kurds want to be a part of a unitary Syrian state," he went on to say. "But in days gone by, the Syrian government was rather clumsy dealing with their Kurds. I think at the end of the day there will be some form of limited autonomy for the Kurds within Syria… [the Kurds] want just more autonomy, which they are likely to be granted. They don't want to join their Kurdish brethren elsewhere in Independence."

"I think it's correct that the Kurds leading a fight to recover Raqqa from Daesh are trying to put cards into their own hands to be used in the final showdown at the negotiating table, where I do believe the Syrian government will make concessions in terms of the teaching of Kurdish language in schools in the area, the granting of identity documents, and other grievances that the Kurds have held."

Syria's northern neighbor Turkey has also been heavily involved in the civil war, supporting anti-Assad Sunni rebel groups that are on the verge of capitulation. "Turkey's options are limited," Ford said. "I think they will realize that some very limited measures of autonomy for the Kurds are the least bad option for them and things could have been a lot worse for them."

Assad is Alawite, a Shiite ethnic minority, but the majority of Syria's Muslim population are Sunnis. Some have expressed concerns that the Sunnis could face persecution in a post-war Syria for opposing Assad, but Ford dismissed the possibility. "Remember that about half the Syrian government army is Sunni, and the Sunni population is spread all over the country. Therefore the question of the reinsertion of Sunnis into society is a nonquestion, and already we've been seeing the movement of the internally displaced back to the areas of origin. These are largely Sunnis anyway."