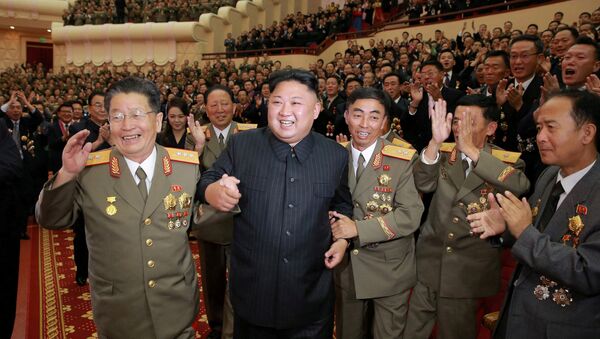 © REUTERS / KCNA
Subscribe
YouTube terminated a channel run by the North Korean government that is a branch of the state-run Korean Central News Agency (KCNA.) The video-sharing site did not release an explanation for why they took the channel down, but they reinstated it just a few days later.

The YouTube channel of Uriminzokkiri, a Pyongyang-owned website that operates out of China, was terminated on Saturday for "violating YouTube's community guidelines," the standard issue message for a YouTube takedown.

No additional details were provided. However, YouTube channels can collect advertising revenue through video monetization, and it's possible that a Pyongyang-owned channel could violate the strict trade sanctions that the US has brought against the DPRK in retribution for repeated missile launches and threats from the secluded Asian country.

Uriminzokkiri has often posted footage boasting of the prowess North Korea's nuclear and missile programs, aggrandizing the North Korean government and people, and belittling or insulting the nation's adversaries.

The missile footage was often useful to analysts attempting to track the North Korean missile program, as they rarely release official information about its very rapidly-advancing missile program's developments.

"When [North Korean leader Kim Jong-un] visits a factory in the middle of nowhere and stares at machine tools, it provides an important insight into the progress they are making," said Jeffrey Lewis, director of the East Asia Nonproliferation Program at the Middlebury Institute of International Studies, to The Guardian.

"It is incredibly frustrating for researchers who use North Korean propaganda for analytic purposes," added Scott Lafoy, a Washington-based satellite imagery analyst, to NK News. "Tracking and digitally reconstructing events is going to be more difficult as these accounts get deleted."

South Korean Foreign Ministry Struck by Over 8,000 Cyberattacks in 2017

Uriminzokkiri also publishes information about figures of interest to the West, such as the 2016 death of James Dresnok, a former US soldier who defected to North Korea in 1962 and is believed to have been the last of the US soldiers to defect.