War with China, Pakistan ‘Within the Realm of Reality’ - Indian Army Chief 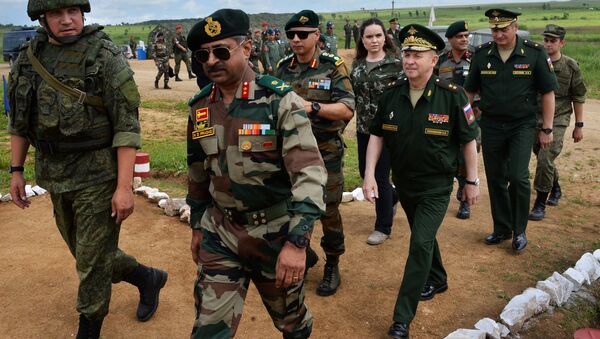 The highest ranking officer in the Indian Army has warned his superiors in New Delhi that India must be prepared for a simultaneous war with both China and Pakistan if relations with the Beijing bloc continue to decline.

Army chief General Bipin Rawat made the comments before the Center for Land Warfare Studies on Wednesday about India's relationship with China, accusing Beijing of "flexing its muscles" and steadily extending its claims of sovereignty over land and sea. He warned that "the salami slicing, taking over territory in a very gradual manner, testing our limits of the threshold is something we have to be wary about and remain prepared for situations emerging which could gradually emerge into conflict."

China has clashed over territory with many of its neighbors, including India in Arunachal Pradesh, Japan in the East China Sea, the Philippines and Vietnam in the South China Sea, and most recently Bhutan in the Doklam Plateau — although in that case, Bhutan mostly acted as an Indian proxy in the tense 10-week standoff over the summer.

Rawat added that there was little hope of a reconciliation with India's longtime rival Pakistan, which has become very closely allied with China. "Whether these conflicts will be limited and confined in space and time, or whether these can expand into an all-out war along the entire front, with [Pakistan] taking advantage of the situation developing on the northern border, is very much likely," Rawat said.

India and Pakistan have repeatedly clashed over border disputes in the Kashmir and Punjab regions, having fought several wars over the territories since independence in 1947. Some 111 to 151 people were killed in more recent skirmishes in 2014 and 2015. Starting in mid-2016, Islamic separatists have fought Indian security forces in Kashmir, leading to at least 92 deaths, 19,000 injuries, and over 8,500 arrests. India claims that Pakistan is funding the separatists to weaken India's hold on the valuable mountainous region.

Rawat rejected the notion that all three nations being nuclear powers would prevent warfare. "Nuclear weapons are weapons of deterrence. Yes, they are. But to say that they can deter war or they will not allow nations to go to war, in our context that may also not be true," he said. If relations continue to degrade, then "warfare lies within the realm of reality."

Chinese authorities called Rawat's comments "shocking," and expressed hope that his views were not the views of his government. "We have noted the statement by relevant people in India, also we noticed some Indian press remarked that the reports are shocking," said Chinese Foreign Ministry spokesman Geng Shuang. "As reported by Indian press … we don't know whether he was authorized to speak those words or it was just his spontaneous words or whether his words represented the position of the Indian government."

"Just two days ago, [Chinese] President Xi Jinping pointed out to [Indian] Prime Minister Narendra Modi that the two countries are each other's development opportunities, not threats. Hope that this military official would see clearly this trend and contribute to the development of China and India relations and see something more in that regard," Shuang added.