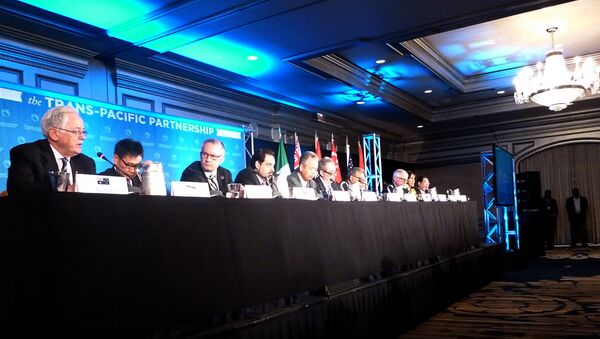 Experts say that the implementation of the Trans-Pacific Partnership may take longer than expected after the US withdrawal from the deal.

MOSCOW (Sputnik) — The implementation of the Trans-Pacific Partnership (TPP) free trade agreement without the United States may take longer than the November deadline due to the likely need for major renegotiation and the current engagement of the Asia-Pacific countries in the settlement of the North Korean issue, experts told Sputnik.

Last week, the chief negotiators from the 11 remaining TPP countries held three-day talks in Sydney to move forward implementation of the regional free trade pact following the United States’ withdrawal from the deal earlier this year. According to several sources, the remaining parties to the deal are considering amendments to the trade pact to re-energize the stalled agreement, the future of which is set to be decided during the Asia-Pacific Economic Cooperation (APEC) leaders' summit in Vietnam in November.

NAFTA Renegotiation Begins: What Do US, Canada, Mexico Really Want?
Jagdish Sheth, professor of Marketing at the Goizueta Business School of the United States’ Emory University, told Sputnik that the "time is not ripe" for the deal's conclusion.

"It will be difficult to reenergize TPP in the near future. Unfortunately, other more urgent events are unfolding, such as North Korean crisis, which will delay any amendments to TPP. The uncertainty in the Asian Theater is large," Sheth said.

Sheth also noted various other aspects preventing the TPP deal from quick conclusion, including the ongoing renegotiation of the North American Free Trade Agreement (NAFTA) deal by Canada and Mexico, also sides to the TPP, as well as the ongoing bilateral talks on the creation of regional alliances such as those Japan is holding with South Korea and with India.

Nigel Cory, a trade policy analyst from the US non-profit Information Technology and Innovation Foundation, told Sputnik that the possibility of a quick conclusion of the new TPP deal would to a large extent depend on whether members would seek to remove provisions insisted on by the United States before its withdrawal.

Cory added that it was likely that some parties to the upcoming TPP renegotiation, such as Vietnam, are planning to push for some substantive changes, such as labor and intellectual property provisions.

"It is hard to judge what the reaction to this proposal will be, as allowing changes for one member means that others could do the same, thereby opening the door to potentially long and messy renegotiations as the remaining members make myriad changes in trying to find a new balance of offensive/defense interests. The remaining TPP members have aimed to push ahead fairly quickly to get a deal in place — possibly by November when leaders will gather in Vietnam for APEC meetings — but any substantive renegotiations would scuttle these plans for a quick deal," Cory pointed out.

Deal Yet to Take Shape

Review of NAFTA Terms May Open Mexican Market for Australia – Canberra
Cory said that the TPP meeting will allow for a better idea on how the remaining TPP members planned to proceed without Washington.

"There has not been a lot of concrete details thus far on what changes the remaining members would make," the expert noted.

Sheth pointed out that the amendments to the TPP agreement’s provisions on labor law and intellectual property, which may be proposed by Vietnam, must be "uncoupled" as unnecessary distractions because there were other international institutions like the World Trade Organization (WTO) which could manage such issues on the global scale.

"I think the key provisions that need to be amended is intracompany trade. It is more than 35 percent of the trade with TPP members, especially with Mexico and Canada. One needs to separate intracompany or intrabusiness group trade from the rest," Sheth pointed out.

As far as the possibility of Washington’s re-engagement with the TPP is concerned, it depends on the scale of investment from the member countries to the United States prompted by the deal, according to the expert. The United States will wait and see how much investment is committed by Taiwan, Canada, Mexico and others, Sheth noted.