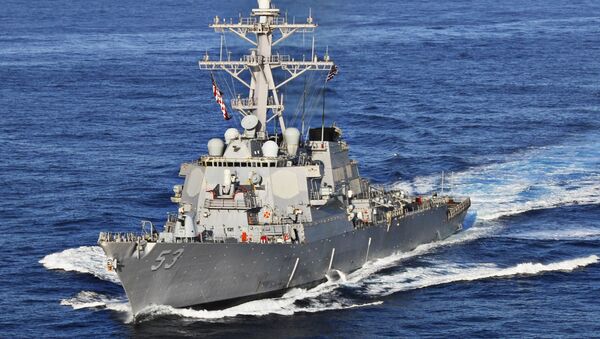 A day after the latest North Korean missile launch, the US military test-intercepted a ballistic missile off the Hawaii coast.

MOSCOW (Sputnik) – The US Missile Defense Agency said it had conducted jointly with the US Navy soldiers missile defense flight test, intercepting a medium-range ballistic missile target off the coast of Hawaii.

The vessel detected and tracked the target missile launched from the Pacific Missile Range Facility on Kauai, Hawaii with its onboard AN/SPY-1 radar, the statement read.

"We are working closely with the fleet to develop this important new capability, and this was a key milestone in giving our Aegis BMD [Ballistic Missile Defense] ships an enhanced capability to defeat ballistic missiles in their terminal phase. We will continue developing ballistic missile defense technologies to stay ahead of the threat as it evolves," MDA Director Lt. Gen. Sam Greaves said as quoted by the agency.

Tokyo Conducts Anti-Missile Drills for First Time Amid Recent N Korean Launch
After launching a projectile Japan considers to be the Hwasong-12  ballistic missile early Tuesday, Pyongyang called the move "just a prelude" ahead of a possible strike on the US terrotory of Guam. Following the North Korean announcement, the Homeland Security Department of Guam said that it continues to monitor the situation following Pyongyang's most recent ballistic missile launch.

While it remains unclear if Pyongyang's missiles are technically capable of reaching the US territory, the change d'affairs of the North Korean Embassy in Russia told Sputnik last week that Pyongyang has finished preparationg for a strike on the US territory of Guam and is ready to carry it out in case of a "provocation."

World
US Will Not Allow North Korea’s 'Lawlessness' to Continue - Haley
Tensions around Pyongyang's missile program have further escalated this summer, following the adoption of the UN Security Council sanctions, which led to North Korea trading threats and warnings with the United States. Most notably, Pyongyang said it might consider an attack on the area near the US territory of Guam in the Western Pacific.

In response, US President Donald Trump threatened to unleash "fire and fury" against North Korea if it endangered the United States in a move criticized by the US Democratic party, as well as some US allies, Russia and China, who consider a dialogue the only way to ease tensions on the Korean Peninsula. Following the latest launch, Trump said that "all options are on the table."