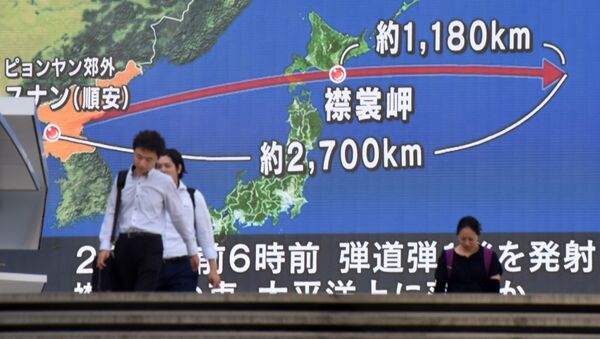 The Chinese Foreign Ministry’s spokeswoman said that sanctions against Pyongyang couldn't be a fundamental solution to the crises on the Peninsula, even though China remained committed to the UN Security Council’s resolutions on North Korea.

BEIJING (Sputnik) — The sanctions against Pyongyang cannot be a fundamental solution to the nuclear and missile crises on the Korean Peninsula, Chinese Foreign Ministry’s Spokeswoman Hua Chunying said Tuesday.

Earlier in the day, North Korea launched a missile which flew over Japan before falling into the Pacific Ocean 1,180 kilometers (733 miles) east of Japan's northern island Hokkaido. The launch was conducted at 05:57 a.m. local time (21:27 GMT on Monday). The Japanese military said the projectile was likely a Hwasong-12 ballistic missile.

"We think that sanctions or threats to impose restrictive measures could not fundamentally resolve the problem on the Korean Peninsula," Hua said at the press briefing.

The spokeswoman noted that China remained committed to the UN Security Council’s (UNSC) resolutions on North Korea, and urged all parties involved to make further efforts to resume the peace talks.

"Of course, China raised its hand and supported the UN Security Council’s resolution on sanctions, we will fully implement the UNSC decisions … At the same time, the Chinese side hopes that other parties will also fully implement the resolution and make efforts to resume negotiations on the peaceful settlement of the Korean peninsula's nuclear issue," Hua noted.

China may "hypothetically" support new UNSC sanctions against North Korea, according to the spokeswoman.

'What if Godzilla Emerged From the Sea and Threw the Missile Back at N Korea?'
Hua stressed that Beijing called on all parties involved to avoid any provocative measures and show restraint.

The situation on the Korean peninsula has become aggravated in recent months due to a series of missile launches and nuclear tests conducted by Pyongyang in violation of UN Security Council resolutions.

In June, China initiated a road map for the settlement of the North Korean crisis, the so-called double freeze plan, which provides for the simultaneous cessation of North Korea's nuclear activity and the US-South Korean military exercises.